The Why Axis: Hidden Motives and the Undiscovered Economics of Everyday Life (Hardcover) 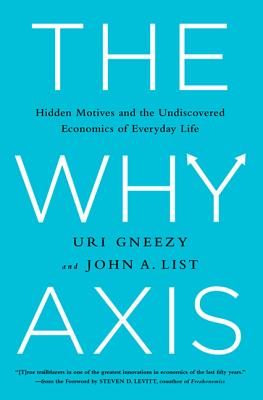 Can economics be passionate? Can it center on people and what really matters to them day-in and day-out. And help us understand their hidden motives for why they do what they do in everyday life?

Uri Gneezy and John List are revolutionaries. Their ideas and methods for revealing what really works in addressing big social, business, and economic problems gives us new understanding of the motives underlying human behavior. We can then structure incentives that can get people to move mountains, change their behavior -- or at least get a better deal.

But finding the right incentive can be like looking for a needle in a haystack. Gneezy and List's pioneering approach is to embed themselves in the factories, schools, communities, and offices where people work, live, and play. Then, through large-scale field experiments conducted "in the wild," Gneezy and List observe people in their natural environments without them being aware that they are observed.

Their randomized experiments have revealed ways to close the gap between rich and poor students; to stop the violence plaguing inner-city schools; to decipher whether women are really less competitive than men; to correctly price products and services; and to discover the real reasons why people discriminate.

To get the answers, Gneezy and List boarded planes, helicopters, trains, and automobiles to embark on journeys from the foothills of Kilimanjaro to California wineries; from sultry northern India to the chilly streets of Chicago; from the playgrounds of schools in Israel to the boardrooms of some of the world's largest corporations. In The Why Axis, they take us along for the ride, and through engaging and colorful stories, present lessons with big payoffs.

Their revelatory, startling, and urgent discoveries about how incentives really work are both revolutionary and immensely practical. This research will change both the way we think about and take action on big and little problems. Instead of relying on assumptions, we can find out, through evidence, what really works. Anyone working in business, politics, education, or philanthropy can use the approach Gneezy and List describe in The Why Axis to reach a deeper, nuanced understanding of human behavior, and a better understanding of what motivates people and why.

Uri Gneezy was born and raised in Israel, where he learned applied game theory firsthand in the streets of Tel Aviv. Dr. Gneezy is the Epstein/Atkinson Endowed Chair in Behavioral Economics and professor of economics and strategy at the Rady School of Management at the University of California, San Diego.

John A. List grew up in a working-class family in Wisconsin -- where his father drove trucks for a living -- and learned economics in hobby markets. Dr. List is the Homer J. Livingston Professor of Economics at the University of Chicago. He has been a research associate at the National Bureau of Economics (NBER) for more than a decade and served as senior economist on the President's Council of Economic Advisors for environmental and resource economics.

“It is hard to imagine any story of innovation in our thinking about economics that does not involve Uri and John. Both in their independent work and in their joint projects, they have expanded and looked at the sensitive underbelly of economics. I can't think of a book that I'm looking forward to more than this one.”—Prof. Dan Ariely, Professor of Behavioral Economics, Duke University; author, Predictably Irrational and The Upside of Irrationality

“John List and Uri Gneezy are among the foremost behavioral economists in the world. Their ideas have been groundbreaking, and their research has been widely read and hugely influential. I'll be eager to read any book they produce.” —Prof. Daniel Gilbert, Professor of Psychology, Harvard University and Author of Stumbling on Happiness

“John List and Uri Gneezy have done the pioneering economic work on whether gender differences are innate or the result of social pressures. They are two of America's leading young economists and their work is followed with great interest.”—Prof. Tyler Cowen, George Mason University; author, The Economic Scene and blogger, Marginal Revolution.com

“John List and Uri Gneezy are leaders in the area of experimental and behavioral economics and rising stars of the profession. Their work bridges the gap between the lab and the field and enables us to learn how economic agents make real decisions in controlled environments and as the economic stakes change. A book bringing their distinctive perspectives and styles has the potential of being a real home run.”—Prof. Daron Acemoglu, Professor of Economics, M.I.T, coauthor of Why Nations Fail

“Gneezy and List are two of the most brilliant and interesting economists in the world. Their work is simultaneously scientifically path breaking and accessible to the general public. They've studied prosaic markets like baseball card conventions, daycare centers, and auto-repair shops, but their ideas are so deep that Gneezy and List reveal that these mundane markets turn out to hold the secrets of human motivation and human behavior. Their work has revolutionized all of social science. I can't wait to read a book that they write.”—Prof. David Laibson, Professor of Economics, Harvard University

“Gneezy and List... specialize in ingenious 'field experiments' that elucidate the workings of social psychology and decision making...Writing in the Freakonomics vein of breezy pop-econ... The authors' lucid, engaging exposition of thought-provoking research spotlights some of our more perverse promptings—and their underlying logic."
—Publishers Weekly, STARRED Review

“Fun, Freakonomics-style stories about why people do the things they do….Gneezy and List offer illuminating discussions on many topics, from the differences between animus-based and economic discrimination to how women can grow up to be more competitive and close the gender gap in the labor market.”
—Kirkus Reviews

“[T]rue trailblazers in one of the greatest innovations in economics of the last fifty years.”
—Steven D. Levitt, coauthor of Freakonomics

“Uri Gneezy is a pioneer whose work tears down the wall between the lab and the field.”
—Alvin E. Roth, winner of the Nobel Prize in Economic Sciences