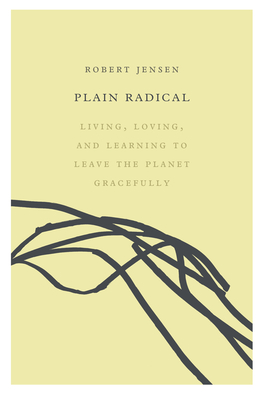 There was nothing out of the ordinary about Jim Koplin. He was just your typical central Minnesota gay farm boy with a Ph.D. in experimental psychology who developed anarchist-influenced, radical-feminist, and anti-imperialist politics, while never losing touch with his rural roots. But perhaps the most important thing about Jim is that throughout his life, almost literally to his dying breath, he spent some part of every day on the most important work we have: tending the garden.

Plain Radical is a touching homage to a close friend and mentor taken too soon. But it is also an exploration of the ways in which an intensely local focus paired with a fierce intelligence can provide a deep, meaningful, even radical engagement with the world.

Drawing on first hand accounts as well as the nearly 3,000 pages of correspondence that flowed between the two men between 1988 and 2012, this book is about the intersection of two biographies and the ideas two men constructed together. It is in part a love story, part intellectual memoir, and part political polemic; an argument for how we should understand problems and think about solutions—in those cases when solutions are possible—to create a decent human future.

Robert William Jensen spent his twenties working at newspapers as a reporter and copy editor, receiving an M.A. in journalism and public affairs from American University. After earning a PhD in media ethics and law from the University of Minnesota, in 1992, he began his teaching career at the University of Texas at Austin, where he is a professor in journalism and interdisciplinary programs. Jensen is also active in a variety of national political movements and community organizations.