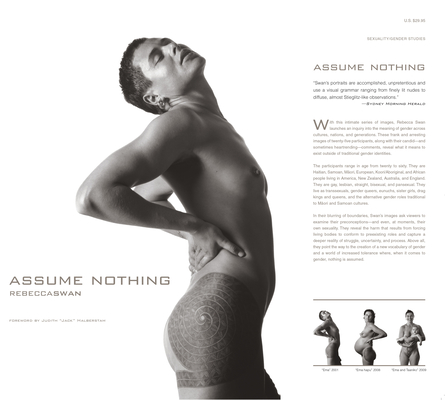 By Rebecca Swan, Judith "Jack" Halberstam (Foreword by)
$29.95
Email or call for price.

With this intimate series of images, Rebecca Swan launches an inquiry into the understanding of gender across cultures, nations, and generations. Assume Nothing features frank and arresting images of twenty-five participants, along with their candid—and sometimes heartrending—comments about what it has meant to exist outside of traditional gender identities.

The participants range in age from twenty to sixty. They are Haitian American, Samoan New Zealander, Maori, European Australian, Aboriginal, and African English. They are gay, lesbian, straight, bisexual, and pansexual. In terms of gender, they are transsexuals, gender queers, eunuchs, sister girls, drag kings and queens, and the alternative gender roles traditional to Maori and Samoan cultures.

In their blurring of boundaries, Swan’s images ask readers to examine their assumptions—and even, at moments, their own sexuality. They reveal the harm that results from forcing living bodies to conform to preexisting roles and capture a deeper reality of struggle, uncertainty, and process. Above all, they point the way to the creation of a new vocabulary of gender and a world of increased tolerance where, when it comes to gender, nothing is assumed.

Rebecca Swan is based in Aotearoa New Zealand where she balances her time between her art, commercial photography and teaching. In a quiet seaside neighbourhood in Tāmaki Makaurau Auckland, her studio is a light filled room in a 100 year old house which she shares with her partner Jack, their dog, Honey and cat, Mr Frost. They grow vegetables in the back garden and have a 150 year old pohutukawa tree in the front.

For over twenty years her work has been published, exhibited and collected in Aotearoa and internationally. She won the S+ART award and in 2018 completed the Fulbright-Wallace Art Residency.

“I’m in love with Rebecca Swan’s perspective, which is rare. When many other people begin to intellectualize the notion that gender does not exist, I often wonder if they are intuitively glimpsing the finer essence of who they really are, beyond the denser vibration of duality expressed here in 3D--or if they are simply giving accepted notions of gender a negative political spin: 'Gender oppresses all! I am no gender!' Of course, those people are doing gender as much as anyone else is. I like what Swan sees. And the work is stunning. She is very talented.” —Loren Rex Cameron, author of Body Alchemy: Transsexual Portraits

"Not only does Rebecca Swan provide us with a timely and evocative motto for the 21st century, she does it with style and panache. Assume Nothing shows us what it looks like when theory is put into practice with love and considerable skill." —Del LaGrace Volcano, gender variant visual artist and activist

"These images can literally take your breath away! Rebecca Swan’s photos virtually pulse with the dynamic spirits of unrestrained genders: all things are possible. The brave and tender hearts bared here display your own humanity." —Jamison Green, author of Becoming a Visible Man