Man Up: Cracking the Code of Modern Manhood (Hardcover) 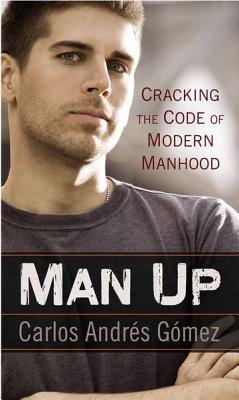 Inspired by the award-winning poet and actor's acclaimed one-man play, a powerful coming-of-age memoir that reimagines masculinity for the twenty-first-century male.
Award-winning poet, actor, and writer Carlos Andres Gomez is a supremely gifted storyteller with a captivating voice whose power resonates equally on the live stage and on the page. In one of his most moving spoken-word poems, Gomez recounts a confrontation he once had after accidentally bumping into another man at a club. Just as they were about to fight, Gomez experienced an unexplainable surge of emotion that made his eyes well up with tears. Everyone at the scene jumped back, as if crying, or showing vulnerability, was the most insane thing that Gomez could possibly have done.
Like many men in our society, Gomez grew up believing that he had to be ready to fight at all times, treat women as objects, and close off his emotional self. It wasn t until he discovered acting that he began to see the true cost of squelching one's emotions and how aggression dominates everything that young males are taught.
Statistics on graduation rates, employment, and teen and young-adult suicide make it clear that the young males in our society are at a crisis point, but Gomez seeks to reverse these ominous trends by sharing the lessons that he has learned. Like Hill Harper's "Letters to a Young Brother," "Man Up" will be an agent for positive change, galvanizing men but also mothers, girlfriends, wives, and sisters to rethink and reimagine the way all men interact with women, deal with violence, handle fear, and express emotion.

Carlos Andres Gomez is an award-winning poet, actor, and writer. A former social worker in Harlem and the south Bronx and a former public school teacher in Philadelphia and Manhattan, Gomez has performed at over 200 colleges and universities and has toured across North America, Europe, the Caribbean, and Africa. Nominated for the Pushcart Prize and named Artist of the Year at the 2009 Promoting Outstanding Writers Awards, he is a two-time International Poetry Slam Champion and two-time National Poetry Slam Finalist. He appeared on HBO s Russell Simmons Def Poetry Jam and co-starred in Spike Lee s film "Inside Man" alongside Denzel Washington, Jodie Foster, and Clive Owen."

“Carlos Andrés Gómez delivers a powerful message with Man Up. This book will help you look inside and ask yourself not only what it truly means to be a man today, but also how you can become more connected to the collective consciousness. An important read that will create a much needed dialogue."
—Russell Simmons, author of the bestselling Do You! and Super Rich