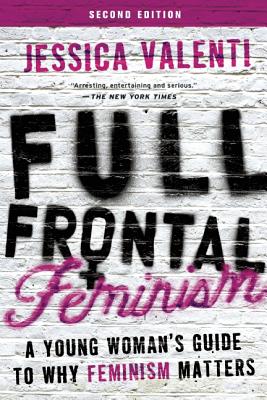 Newly revised and updated, the #1 must-read book for a new generation of feminists who refuse to accept anything less than equality and justice for all women

Now in its updated second edition, Full Frontal Feminism embodies the forward-looking messages that bestselling author Jessica Valenti propagated as founder of the popular website, Feministing.com. Smart and relatable, the book serves as a complete guide to the issues that matter to today's young women, including health, equal pay, reproductive rights, violence, education, relationships, sexual independence and safety, the influence of pop culture, and more.

You're a Hardcore Feminist. I Swear.
Feminists Do It Better (and Other Sex Tips)
Pop Culture Gone Wild
The Blame (and Shame) Game
If These Uterine Walls Could Talk
Material World
My Big Fat Unnecessary Wedding and Other Dating Diseases
"Real" Women Have Babies
I Promise I Won't Say "Herstory"
Boys Do Cry
Beauty Cult

Sex and the City Voters, My Ass
A Quick Academic Aside

Since its original publication, Full Frontal Feminism has informed, inspired, and assured readers with the ultimate message of truth: You a feminist, and that's pretty cool.

Jessica Valenti is the author of multiple books on feminism, politics and culture, and editor of the anthology Yes Means Yes: Visions of Female Sexual Power and a World Without Rape.

Jessica is also the founder of Feministing.com, which Columbia Journalism Review called "head and shoulders above almost any writing on women's issues in mainstream media."

Her writing has appeared in publications like the New York Times, the Washington Post, the Nation, and Ms. magazine. She is currently a columnist at the Guardian US. Jessica lives in Brooklyn with her husband and daughter.

"If feminism is enjoying a revival among young women, much of the credit should go to women such as Jessica Valenti."
—Guardian

"Valenti's writing has a wonderful defiant quality reminiscent of the days of the movement's youth."
—Washington Post

"Full Frontal Feminism shows us feminism is alive and well and kicking all kinds of oppressive male ass."—Margaret Cho

"Full Frontal Feminism is an irreverent guide to why young women should embrace the F-word."—New York Magazine