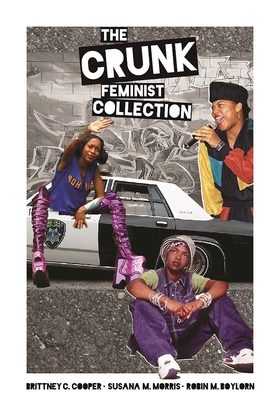 For the Crunk Feminist Collective, their academic day jobs were lacking in conversations they actually wanted--relevant, real conversations about how race and gender politics intersect with pop culture and current events. To address this void, they started a blog that turned into a widespread movement. The Collective's writings foster dialogue about activist methods, intersectionality, and sisterhood. And the writers' personal identities--as black women; as sisters, daughters, and lovers; and as television watchers, sports fans, and music lovers--are never far from the discussion at hand.

These essays explore Sex and Power in the Black Church, discuss how Clair Huxtable is Dead, list Five Ways Talib Kweli Can Become a Better Ally to Women in Hip Hop, and dwell on Dating with a Doctorate (She Got a Big Ego?). Self-described as critical homegirls, the authors tackle life stuck between loving hip hop and ratchet culture while hating patriarchy, misogyny, and sexism.

"By centering a Black Feminist lens, The Collection provides readers with a more nuanced perspective on everything from gender to race to sexuality to class to movement-building, packaged neatly in easy-to-read pieces that take on weighty and thorny ideas willingly and enthusiastically in pursuit of a more just world." --Autostraddle

Brittney Cooper is Assistant Professor of Women's and Gender Studies and Africana Studies at Rutgers University. Her forthcoming book Race Women: Gender and the Making of a Black Public Intellectual Tradition (University of Illinois Press) examines the long history of Black women's thought leadership in the US, with a view toward reinvigorating contemporary scholarly and popular conversations about Black feminism. In addition to a weekly column on race and gender politics at Salon.com, her work and words have appeared at the New York Times, the Washington Post, Cosmo.com, TV Guide, the Los Angeles Times, Ebony.com, The Root.com, MSNBC's Melissa Harris-Perry Show, All In With Chris Hayes, Disrupt with Karen Finney, and Third Rail on Al-Jazeera America, among many others. She is also a co-founder of the Crunk Feminist Collective, a popular feminist blog. In 2013 and 2014, she was named to the Root.com's Root 100, an annual list of Top Black Influencers. Susana M. Morris is co-founder of the Crunk Feminist Collective and a contributing writer on the blog. She received her Ph.D. from Emory University and is currently Associate Professor of Literature, Media, and Communication at the Georgia Institute of Technology. Her book, Close Kin and Distant Relatives: The Paradox of Respectability in Black Women's Literature, was published by the University of Virginia Press in February 2014. Robin M. Boylorn is Assistant Professor of Interpersonal and Intercultural Communication at The University of Alabama. She received her Ph.D. from University of South Florida in 2009. She is the author of the award-winning monograph Sweetwater: Black Women and Narratives of Resilience (Peter Lang, 2013), and co-editor of Critical Autoethnography: Intersecting Cultural Identities in Everyday Life (Left Coast Press, 2014).