Hey, Shorty!: A Guide to Combating Sexual Harassment and Violence in Schools and on the Streets (Paperback) 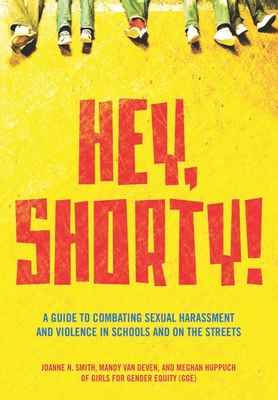 At every stage of education, sexual harassment is common, and often considered a rite of passage for young people. It's not unusual for a girl to hear "Hey, Shorty " on a daily basis, as she walks down the hall or comes into the school yard, followed by a sexual innuendo, insult, come-on, or assault. But when teenagers are asked whether they experience this in their own lives, most of them say it's not happening. Girls for Gender Equity, a nonprofit organization based in New York City, has developed a model for teens to teach one another about sexual harassment. How do you define it? How does it affect your self-esteem? What do you do in response? Why is it so normalized in schools, and how can we as a society begin to address these causes? Geared toward students, parents, teachers, policy makers, and activists, this book is an excellent model for building awareness and creating change in any community.

Girls for Gender Equity (GGE) is an intergenerational, grassroots organization committed to the physical, psychological, social and economic development of girls and women. Through education, organizing and physical fitness, GGE encourages communities to remove barriers and create opportunities for girls and women to live self-determined lives. Despite minimal resources, GGE fights for urban girls, makes extraordinary contributions to the community and to the educational, economic and cultural life of New York City. Joanne Smith, founder and executive director of Girls for Gender Equity (GGE), is a Haitian American social worker and unapologetic feminist born in New York City. Smith is an alumna of Hunter Graduate School of social work. She has been awarded many times over, including: the Union Square Award (2006); the Susan B. Anthony Award from NOW-NY (2008); a Rising Star Award from the Educational Equity Center (2008); the Extraordinary Woman Award presented by Brooklyn District Attorney Charles J. Hynes (2009); and the Stonewall Women's Award from the Stonewall Democratic Club in recognition of her leadership and dedication to women's and LGBTQ rights (2010). She has also been inducted in the New York City Hall of Fame. Meghan Huppuch comes from a family of bold feminists and adventurers. She is a strong believer in young people's power to create change and has focused her energy on work that directly affects youth. Currently the director of community organizing at Girls for Gender Equity, in the past she has worked as a teaching assistant in a summer reading academy, artist's assistant for a community mural designed and painted by teens, a fundraiser for a local chapter of the Gay Lesbian and Straight Education Network, and a programmer/representative for the Center for Multicultural Education and Programming at NYU, where she majored in social and cultural analysis. Originally from Ossining, NY, Huppuch resides in Bedford-Stuyvesant, Brooklyn. Mandy Van Deven is a freelance writer, radical activist, and founder of the Feminist Review blog. Focusing on gender, sexuality, popular culture, and religion, her work has appeared in various online and print media, including AlterNet, Bitch, ColorLines, Marie Claire, and The Women's International Perspective. Van Deven worked for over ten years as a grassroots organizer in New York and Atlanta. She currently lives in Calcutta, India.