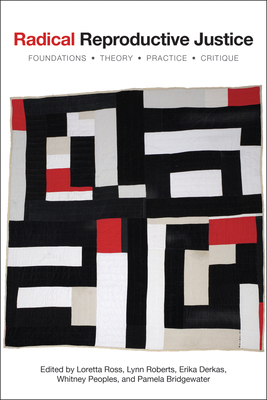 Expanding the social justice discourse surrounding reproductive rights to include issues of environmental justice, incarceration, poverty, disability, and more, this crucial anthology explores the practical applications for activist thought migrating from the community into the academy.

Radical Reproductive Justice assembles two decades' of work initiated by SisterSong Women of Color Health Collective, creators of the human rights-based "reproductive justice" framework to move beyond polarized pro-choice/pro-life debates. Rooted in Black feminism and built on intersecting identities, this revolutionary framework asserts a woman's right to have children, to not have children, and to parent and provide for the children they have.

The book is as revolutionary and revelatory as it is vast. --Rewire

Human and women's rights activist Loretta Ross co-founded and served as National Coordinator of the SisterSong Women of Color Reproductive Justice Collective, a network that organizes women of color in the reproductive justice movement. In fact, Ross is one of the creators of the term Reproductive Justice, which envelops human rights and social justice into one movement. In 2004, Ross served as National Co-Director of the March for Women's Lives in Washington DC. It became the largest protest march in US history with more than one million participants. Ross is the co-author of Undivided Rights: Women of Color Organize for Reproductive Justice and author of "The Color of Choice" chapter in Incite! Women of Color Against Violence published in 2006. She has also written extensively on the history of African American women and reproductive justice activism. Lynn Roberts has a BS in human development from Howard University and a PhD in Human Services Studies from Cornell University. The City University of New York has been her academic home since 1995, and she is currently assistant professor in the department of Community Health and Social Sciences at the Graduate School of Public Health & Health Policy. Prior to joining CUNY, she oversaw the development, implementation and evaluation of several prevention programs for women and youth in NYC. She has also served on the board of SisterSong Women of Color Reproductive Justice Collective. Her current activism and scholarship examine the intersections of race, class and gender in adolescent dating relationships, juvenile justice and reproductive health policies; as well as the impact of models of collaborative inquiry and teaching on civic and political engagement. Erika Derkas is a professor of Sociology and Women's Studies at New Mexico Highlands University and is an active researcher in the area of reproductive justice, particularly, international sex worker organizing, population control, and sterilization abuse among poor women and women of color. She is currently the co-director of the Women's Studies program and the Women's Center at Highlands University and has been involved in feminist organizing for numerous years. Her research has taken her from New Zealand to study organizing efforts to decriminalize sex work to Palestine where she is exploring ethnic identity formation among youth, African Palestinians, and women in higher education. Whitney Peoples is currently visiting assistant professor in the department of Multicultural Women's and Gender Studies at Texas Woman's University. She received her BA from Agnes Scott College, her MA from the University of Cincinnati, and her PhD from Emory University in Women's, Gender & Sexuality Studies. Her work has been published in books such as What's the Big Idea? Feminist Perspectives on Advertising (Lexington Books 2017); A History of African American Autobiography (Cambridge University Press 2017); and Womanist and Black Feminist Responses to Tyler Perry's Productions (Palgrave MacMillan 2014). She has also published articles in the Journal of College Science Teaching and Meridians. Pamela Bridgewater was an activist lawyer and legal scholar specializing in issues related to reproduction, sexuality, identity, poverty and women's health. She received her JD from Florida State University, and participated in the US Supreme Court case Judy Madsen et al. v. Women's Health Center Inc. Aware Woman Center for Choice, Inc. She went on to obtain an LL.M from the University of Wisconsin Law School, and while in Wisconsin, she developed a lifelong scholarly interest in the relationship between reproductive freedom and black emancipation. As a lawyer, Pamela provided legal defense of reproductive health care clinics, service providers and activists, and also provided pro bono legal service and consultation on matters such as estate planning for poor people and people living with HIV/AIDS, as well as legal services for peace activists and activists within the fair trade and globalization movements. She taught as professor at Northeastern University's School of Law and at American University's Washington College of Law. She passed away in 2014.