Woman to Woman Sexual Violence: Does She Call It Rape? (Northeastern Series on Gender) (Paperback) 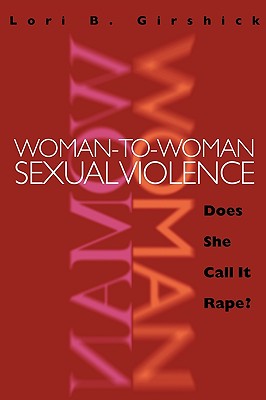 A woman raping another woman is unthinkable. This is not how women behave, society tells us. Our legal system is not equipped to handle woman-to-woman sexual assault, our women's services do not have the resources or even the words to reach out to its victims, and our lesbian and gay communities face hurdles in acknowledging its existence. Already dealing with complex issues related to their sexual identities, and frequently overwhelmed by shame, lesbian and bisexual survivors of such violence are among the most isolated of crime victims. In a work that is sure to stir controversy, Lori B. Girshick exposes the shocking, hidden reality of woman-to-woman sexual violence and gives voice to the abused. Drawing on a nationwide survey and in-depth interviews, Girshick explores the experiences and reflections of seventy women, documenting what happened to them, how they responded, and whether they received any help to cope with the emotional impact of their assault. The author discusses how the lesbian community has silenced survivors of sexual violence due to myths of lesbian utopia, and considers what role societal homophobia, biphobia, and heterosexism has played in this silencing. Ranging from date and acquaintance rape, to domestic sexual abuse by partners, to sexual harassment in the workplace, these explicit and harrowing stories provide a fuller understanding of woman-to-woman sexual violence than exists anywhere else. This provocative book offers much-needed insights on a subject rarely discussed in the literature on domestic violence, and it does so with compassion. Above all, it recommends how agencies can best provide services, outreach, and treatment to survivors of woman-to-woman rape and lesbian battering, using suggestions by the survivors themselves.

LORI B. GIRSHICK has dedicated her life to working for social justice and ending inequalities. A nationally known trainer in LGBT domestic and sexual violence and LGBT sensitivity, she is author of three books, Soledad Women: Wives of Prisoners Speak Out (1996), No Safe Haven: Stories of Women in Prison (Northeastern, 1999) and Woman-to-Woman Sexual Violence: Does She Callit Rape? (NUP, 2002). Currently she is a professor in Sociology at Chandler-Gilbert Community College in Chandler, Arizona. JAMISON GREEN is an educator, policy consultant, and corporate diversity trainer specializing in transgender and transsexual issues. He serves on the boards of directors of the Transgender Law & Policy Institute and the World Professional Association for Transgender Health. He is also a member of the advisory boards for the Institute for Intersex Children and the Law and the Center for Research on Gender and Sexuality at San Francisco State University. He is the author of Becoming a Visible Man (2004).