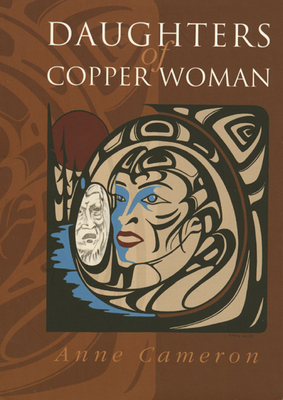 Since its first publication in 1981, Daughters of Copper Woman has become an underground classic, selling over 200,000 copies. Now comes a new edition that includes many pieces cut from the original as well as fresh material added by the author. Here finally, after twenty-two years of gathering dust, is the complete version of the groundbreaking bestseller.

In this, her best-loved work, Anne Cameron has created a timeless retelling of northwest coast Native myths that together create a sublime image of the social and spiritual power of woman. Cameron weaves together the lives of legendary and imaginary characters, creating a work of fiction with an intensity of style matched by the power of its subject.

Anne Cameron was born in Nanaimo, BC. She began writing at an early age, starting with theatre scripts and screenplays. In 1979, her film Dreamspeaker, directed by Claude Jutra, won seven Canadian Film Awards, including best script. After being published as a novel, Dreamspeaker went on to win the Gibson Award for Literature. She has published more than 30 books, including the underground classic Daughters of Copper Woman, its sequel, Dzelarhons, novels, stories, poems and legends - for adults and children. Her most recent novels are Family Resemblances, Hardscratch Row, and a new, revised edition of Daughters of Copper Woman. She lives in Tahsis, BC