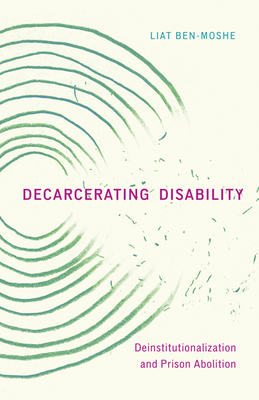 Prison abolition and decarceration are increasingly debated, but it is often without taking into account the largest exodus of people from carceral facilities in the twentieth century: the closure of disability institutions and psychiatric hospitals. Decarcerating Disability provides a much-needed corrective, combining a genealogy of deinstitutionalization with critiques of the current prison system.

Liat Ben-Moshe provides groundbreaking case studies that show how abolition is not an unattainable goal but rather a reality, and how it plays out in different arenas of incarceration—antipsychiatry, the field of intellectual disabilities, and the fight against the prison-industrial complex. Ben-Moshe discusses a range of topics, including why deinstitutionalization is often wrongly blamed for the rise in incarceration; who resists decarceration and deinstitutionalization, and the coalitions opposing such resistance; and how understanding deinstitutionalization as a form of residential integration makes visible intersections with racial desegregation. By connecting deinstitutionalization with prison abolition, Decarcerating Disability also illuminates some of the limitations of disability rights and inclusion discourses, as well as tactics such as litigation, in securing freedom.

Decarcerating Disability’s rich analysis of lived experience, history, and culture helps to chart a way out of a failing system of incarceration.

Liat Ben-Moshe is assistant professor of criminology, law, and justice at the University of Illinois at Chicago. She is coeditor of Disability Incarcerated: Imprisonment and Disability in the United States and Canada.

"Decarcerating Disability is a groundbreaking feminist study of the affinities, interrelations, and contradictions between prison abolition and psychiatric deinstitutionalization. Emphasizing the need for a more expansive field of critical carceral studies, Liat Ben-Moshe compellingly demonstrates the important lessons we can discover through serious engagements with radical disability movements. Scholars and activists alike should read this book without delay!"—Angela Y. Davis, University of California, Santa Cruz

"In Decarcerating Disability, Liat Ben-Moshe carefully and incisively models an intersectional approach to abolition grounded in feminist, queer, and crip of color critique. Moving beyond demands for inclusion and critiques of overrepresentation, Ben-Moshe makes a powerful and persuasive case for a disability studies that recognizes state violence as central to its work and the carceral industrial complex as a site for queer coalitions for racial and disability justice. In so doing, she paves the way for thinking not only disability and disability studies differently, but also liberation itself."—Alison Kafer, University of Texas at Austin

"Decarcerating Disability is a must-read for anyone interested in understanding and dismantling the interlocking systems of incarceration that shape the contemporary political landscape and shorten so many lives. Liat Ben-Moshe shows how the effectiveness of abolitionist work has been limited by the marginalization of disability and anti-sanism analysis and advocacy. She not only exposes how much contemporary abolitionists have to learn from historical struggles for deinstitutionalization, she also demonstrates a more truly intersectional method of abolitionist scholar-activism that we urgently need. This book is both a corrective intervention and a path-breaking tool for developing better strategy toward the world that those who seek liberation are fighting to build."—Dean Spade, Seattle University School of Law

"Ben-Moshe outlines how people fought for a new paradigm in mental health treatment before. Beginning in the 1960s, widespread deinstitutionalization sparked by disability activists shut down asylums across the country. Many see this movement now as a failure because it led to more people with mental illness being herded into jails and prisons. But Ben-Moshe argues that this was a pivotal step in abolition by grassroots organizing."—Teen Vogue

"Examining decarceration and deinstitutionalisation within the same frame is vitally important...the book challenges us to think about the range of carceral facilities that exist."—Race & Class

"A groundbreaking connection between disability justice and prison abolition."—Public Books

"Decarcerating Disability should be read not only by students and scholars of African-American studies, criminology, critical theory, gender studies, law, or sociology, nor only by policy makers, but by all who are concerned about disability, gender, or racial justice."—American Journal of Sociology