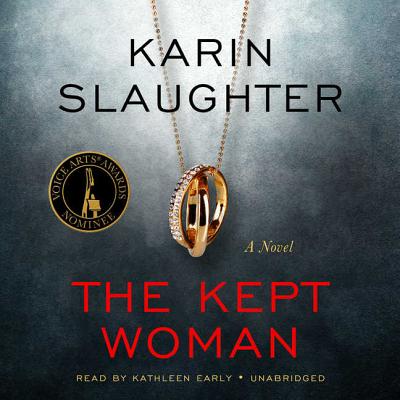 By Karin Slaughter, Kathleen Early (Read by)
$29.95
Email or call for price.

This is book number 8 in the Will Trent series.

“The Kept Woman features Georgia detective Will Trent in a compelling mystery involving a superstar sports figure, his wife, and a rape. The athlete had already been cleared of the rape allegations when a dead man is found in a building he is making into a high-end club with other wealthy investors. At the scene, blood is found that doesn't match that of the dead man, indicating that there is a second victim - a woman - in dire trouble. Another suspenseful tour de force from Slaughter.”
— Barbara Kelly (W), Kelly's Books to Go, South Portland, ME

It's the most dangerous case of Will Trent's career. He knows this from the moment he sets foot in the abandoned Atlanta warehouse where a body lies on the floor--the body of an ex-cop. Bloody footprints leading away from the scene reveal that another victim, evidently a woman, was carried away ... and has vanished into thin air. And, worst of all, the warehouse belongs to the city's biggest and most high-profile athlete--a local hero protected by the world's most expensive lawyers. A hero married to Will's ex-wife. A hero whom Will's superiors at the Georgia Bureau of Investigation have spent the last six months investigating for rape.But for Will--and also for Sara Linton, the GBI's newest medical examiner--the case is about to get even worse. Because an unexpected discovery at the scene reveals a personal link to Will's troubled past ... and the consequences will wreak havoc on his life and the lives of those he loves, those he works with, and those he pursues.Relentlessly suspenseful and furiously paced, peopled with characters who leap from the page, The Kept Woman marks Karin Slaughter's triumphant return to her most popular series.