Surinamese Music in the Netherlands and Suriname (Caribbean Studies) (Paperback) 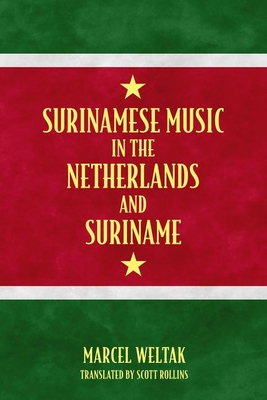 Contributions by Herman Dijo, J. Ketwaru, Guilly Koster, Lou Lichtveld, Pondo O'Bryan, and Marcel Weltak When Marcel Weltak's Surinamese Music in the Netherlands and Suriname was published in Dutch in 1990, it was the first book to provide an overview of the music styles originating from the land that had recently gained its independence from the Netherlands. Up until the 1990s, little had been published that observed the music of the country. Weltak's book was the first to examine both the instruments and the way in which they are played as well as the melodic and rhythmic components of music produced by the country's ethnically diverse populations, including people of Amerindian, African, Indian, Indonesian/Javanese, and Chinese descent. Since the book's first appearance, a new generation of musicians of Surinamese descent has carried on making music, and some of their elders referred to in the original edition have passed away. The catalog of recordings that have become available has also expanded, particularly in the areas of hip-hop, rap, jazz, R&B, and new fusions such as kaskawi. This edition, in English for the first time, includes a new opening chapter by Marcel Weltak giving a historical sketch of Suriname's relationship to the Netherlands. It includes updates on the popular music of second- and third-generation musicians of Surinamese descent in the Netherlands, and Weltak's own subsequent and vital research into the Amerindian and maroon music of the interior. The new introduction is followed by the integral text of the original edition. New appendices have been added to this edition that include a bibliography and updated discography; a listing of films, videos, and DVDs on or about Surinamese music or musicians; and concise, alphabetically arranged notes on musical instruments and styles as well as brief biographies of those authors who contributed texts.

Marcel Weltak was a staff member of the Stichting Wetenschappelijke Informatie (Foundation for Scholarly Information) and of the daily newspapers De West and De Ware Tijd. He was also editor of Adek and arts correspondent for the Dutch daily newspapers De Waarheid and de Volkskrant. Besides publishing the first edition of Surinaamse muziek in Nederland en Suriname in 1990, he has written articles in various music and cultural magazines. Scott Rollins has been a cultural entrepreneur for more than forty years. He has published three volumes of poetry and is translator of Boom's Blues: Music, Journalism, and Friendship in Wartime and The Music of the Netherlands Antilles: Why Eleven Antilleans Knelt before Chopin's Heart, both published by University Press of Mississippi.