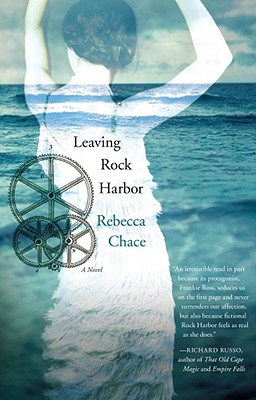 “Tightly written, this is a novel full of love, rich New England history, and a vivid description of New England mill town's economic troubles in the wake of World War I. Frankie Ross, an independent, stubborn young woman tells us her story of loving two men, one of wealthy, upper middle class privilege and the other a Portuguese mill worker. An engaging read, and not just for New Englanders!”
— Annie Philbrick, Bank Square Books, Mystic, CT

An unforgettable coming-of-age story and a luminous portrayal of a dramatic era of American history, Rebecca Chace’s Leaving Rock Harbor takes readers into the heart of a New England mill town in the early twentieth century.

On the eve of World War I, fourteen-year-old Frankie Ross and her parents leave their simple life in Poughkeepsie to seek a new beginning in the booming city of Rock Harbor, Massachusetts. Frankie’s father finds work in a bustling cotton mill, but erupting labor strikes threaten to dismantle the town’s socioeconomic structure. Frankie soon befriends two charismatic young men—Winslow Curtis, privileged son of the town’s most powerful politician, and Joe Barros, a Portuguese mill worker who becomes a union organizer—forming a tender yet bittersweet love triangle that will have an impact on all three throughout their lives.

Inspired in part by Chace’s family history, Frankie’s journey to adulthood takes us through the First World War and into the Jazz Age, followed by the Great Depression—from rags to riches and back again. Her life parallels the evolution of the mill town itself, and the lost promise of a boomtown that everyone thought would last forever.

"A New England mill town circa World War I is the setting for this moody novel, whose heroine struggles with painful memories and divided loyalties." --New York Times Book Review, Editors' Choice

"An irresistible read in part because its protagonist, Frankie Ross, seduces us on the first page and never surrenders our affection, but also because fictional Rock Harbor feels as real as she does.
-- Richard Russo, author of That Old Cape Magic and Empire Falls

"Rebecca Chace’s eye is sharp, whether she’s writing about New England cotton mills in the years surrounding the first World War, bathing in the Atlantic -- wearing a corset or wearing almost nothing -- or eating lobster and drinking champagne in a fading but grand seaside hotel. Frankie Ross, the narrator of Leaving Rock Harbor, doesn’t manage her life sensibly, but she’s lovable because she can love, and it was a great pleasure to read her story."
-- Alice Mattison, author of Nothing is Quite Forgotten in Brooklyn


"Chace has deftly and seamlessly interwoven a love story, an elegy for a vanished way of life, and an account of a crucial and neglected period in America's social history. Nobody who reads this moving, evocative and sure-handed novel will ever forget Frankie and her world."
-- David Gates, author of Jernigan

"Rebecca Chace’s Leaving Rock Harbor is beautifully constructed, tender, and irresistibly readable. It signals the coming of age of a great talent."
-- Louis Begley, author of Matters of Honor

"Leaving Rock Harbor brings to life the world of an early twentieth century mill town with rich detail and simple grace. Chace writes movingly about what is both gained and lost in the name of progress, not only for her characters, but for us all."
-- Marisa Silver, author of The God of War

"Frankie’s personal story neatly parallels the larger history of the town and the country." --The Boston Globe

"This graceful novel, set in a coastal Massachusetts mill town in the early decades of the 20th century, traces upheaval from several vantage points... Chace’s story is dramatic; her characters, well defined by class and personality, are vivid and true; but most evocative are her details of this particular time and place, from the smell of the mill’s dye room to the feel of a corset." --The Atlantic

"Like the offspring of some Anne Tyler/John Updike union, Chace writescrisply and poetically and imbues Frankie with just enough flaws to make herboth lovable and entirely believable." --Baltimore Magazine