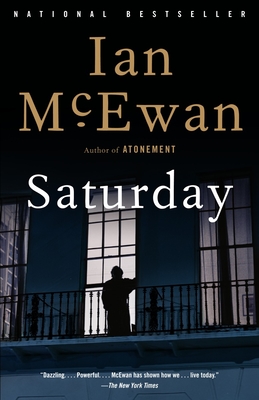 NATIONAL BESTSELLER • The Booker Prize winner and bestselling author of Atonement follows an ordinary man through a Saturday whose high promise gradually turns nightmarish in this “dazzling [and] powerful” novel (The New York Times).

Henry Perowne—a neurosurgeon, urbane, privileged, deeply in love with his wife and grown-up children—plans to play a game of squash, visit his elderly mother, and cook dinner for his family. But after a minor traffic accident leads to an unsettling confrontation, Perowne must set aside his plans and summon a strength greater than he knew he had in order to preserve the life that is dear to him.

IAN MCEWAN is the critically acclaimed author of seventeen novels and two short story collections. His first published work, a collection of short stories, First Love, Last Rites, won the Somerset Maugham Award. His novels include The Child in Time, which won the 1987 Whitbread Novel of the Year Award; The Cement Garden; Enduring Love; Amsterdam, which won the 1998 Booker Prize; Atonement; Saturday; On Chesil Beach; Solar; Sweet Tooth; The Children Act; Nutshell; and Machines Like Me, which was a number-one bestseller. Atonement, Enduring Love, The Children Act and On Chesil Beach have all been adapted for the big screen.

“This extraordinary book is not a political novel. It is a novel about consciousness that illuminates the sources of politics.” —The Nation

“Saturday is an exemplary novel, engrossing and sustained. It is undoubtedly McEwan’s best.” —The Spectator

“Read the last 100 pages at one sitting–the pace and the thrill allow it.... Exhilarating.” —Los Angeles Times Book Review

“McEwan is in the first tier of novelists writing in English today.... He has achieved a complete mastery of his craft.” —The New York Observer

“This is McEwan at the height of his powers.... More audacious than Atonement.” —The Baltimore Sun

“One of the most powerful pieces of post—9/11 fiction yet published.” —The New York Times

“Complex, suspenseful.... This novel ... reinforces Ian McEwan’s status as the supreme novelist of his generation.” —The Sunday Times (London)

“Engrossing.... A thoughtful, measured and mature look at our world today.... [McEwan’s] skill at weaving together suspense, psychological depth and beautiful prose makes him among Britain’s best.” —The Atlanta Journal-Constitution

“A major event.... Saturday proceeds serenely into very different territory where the most secure existence is ringed by sinister possibilities.” —Time

“Read this book.... On the level of the sentence, McEwan is smart, witty and insightful.... His writing astounds..... Saturday is almost too good to bear.” —The Times-Picayune

“McEwan’s special achievement ... is not only to give his narrative ... near-hallucinatory clarity and verisimilitude, but also to make you realize that the world of his novel is our world. It’s a book of poignant insight into the temper of the times.... And it’s something rare and precious: a wise book.” —San Jose Mercury News

“McEwan’s sentences are perfect, and his novels are always powerful and intelligent.” —People

“Sober yet scintillating.... Lucidly shows us that civilization and culture and the life of the mind, fragile as they seemingly are, nonetheless have a resilience that can outlast barbarism.” —Christopher Hitchens, The Atlantic Monthly

“A magnificent new novel that captures both the comforts and the anxieties of the world we live in right now.” —Vogue

“The distinctive achievement of McEwan’s work has been to marry literary seriousness and ambition with a pace and momentum more commonly associated with genre fiction. He is the master clockmaker of novelists, piecing together cogs and wheels of his plots with unerring meticulousness.” —The New York Times Book Review

“Marvelous....  A magical book.... McEwan shows again the quiet brilliance of his prose and his insights.” —Detroit Free Press

“Captivating. . . . The prose is so precise and evocative the reader can ‘see’ the scenes unfolding. . . . [McEwan] is at the top of his game.” —The Denver Post