The Dead Take the A Train (Carrion City #1) (Hardcover) 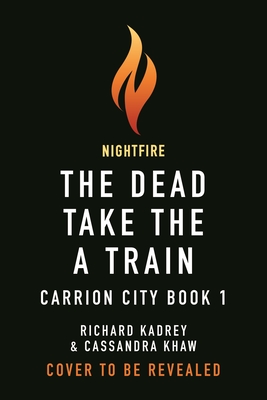 Julie Crews is a coked-up, burnt-out thirty-something who packs a lot of magic into her small body. She’s trying to establish herself as a major Psychic Operative in the NYC magic scene, and she’ll work the most gruesome gigs to claw her way to the top.

Desperate to break the dead-end grind, Julie summons a guardian angel for a quick career boost. But when her power grab accidentally releases an elder god hellbent on the annihilation of our galaxy, the body count rises rapidly.

The Dead Take the A Train is a high-octane cocktail of Khaw’s cosmic horror and Kadrey’s gritty fantasy—shaken, not stirred.

Richard Kadrey is the New York Times bestselling author of the Sandman Slim supernatural noir series. Sandman Slim was included in Amazon’s “100 Science Fiction & Fantasy Books to Read in a Lifetime,” and is in production as a feature film. Some of Kadrey’s other books include The Grand Dark, The Everything Box, Ballistic Kiss, and Butcher Bird. He also writes screenplays and for comics such as Heavy Metal, Lucifer, and Hellblazer.

CASSANDRA KHAW is an award-winning game writer, and former scriptwriter at Ubisoft Montreal. Khaw's work can be found in places like Fantasy & Science Fiction, Lightspeed, and Tor.com. Khaw's first original novella, Hammers on Bone, was a British Fantasy award and Locus award finalist, and their novella, Nothing But Blackened Teeth, is published by Nightfire.

“Khaw is a master of the terrifying tale.” —Sam J. Miller

“Khaw is a master of teasing your senses, and then terrorizing them!” —N. K. Jemisin

“Reading Khaw is akin to watching a nightmare ballet, full of beauty and elegance, pain and fragility, and breathless terror.” —Christopher Golden

“Kadrey has written for us a beautiful nightmare — one that’s often eerily familiar.” —Chuck Wendig

"Unsettling and dreamlike, seductive and bleak, the jaws of The Grand Dark gape to devour you.” —Max Gladstone

“Wildly ambitious and inventive fantasy from an author who’s punching above his weight in terms of worldbuilding—and winning.” —Kirkus Reviews (starred review)

"It’s the work of a major sff creator going way out in a limb in the effort to wholly redefine himself, all while crystallizing what’s made him great.” —NPR