Sightwitch: A Tale of the Witchlands (Paperback) 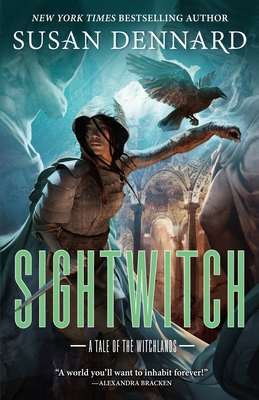 This is book number 5 in the The Witchlands series.

From New York Times bestseling author Susan Dennard, return to the world fo the Witchlands in Sightwitch, an illustrated companion told through Ryber's journal entries & sketches. From the Twelve Paladins to the Rook Kings, from Eridysi to a broken sword and looking glass, learn how the secrets of the past set the entire series in motion.

Secrets long-buried. Dark magic waking. And one young acolyte with the fate of the Witchlands in her hands...

Sisters with the gift of Sight—Sightwitches, who can see into the future—are of a rare and ancient order. Raised in a secluded convent, they await the invitation of their goddess to enter the depths of the mountain and receive the sacred gift of foretelling.

But for young Ryber Fortiza, that call never comes. As the only sister without Sight, Ryber has devoted herself to the goddess. Surely, if she just works hard enough, she will finally be gifted like everyone else.

Until one day, all Sisters who possess the Sight are summoned into the mountain—and never return. Now Ryber, still Sight-less, is the only one left. Can she, who has spent her life feeling like the weakest, be the one to save her Sisters and the ancient power they protect?

On her journey underground, she encounters a young captain named Kullen Ikray, who has no memory of who he is or how he got there. Together they trek ever deeper, the mountain tunnels filled with mysteries and horrors. And what they find at the end will alter the fate of the Witchlands forever.

Susan Dennard is the award-winning, New York Times bestselling author of the Witchlands series (now in development for TV from the Jim Henson Company), the Something Strange and Deadly series, and the upcoming Luminaries series, as well as various short stories and other tales across the internet. She also runs the popular newsletter for writers, the Misfits and Daydreamers. When not writing or teaching writing, she can be found rolling the dice as a Dungeon Master or mashing buttons on one of her way too many consoles.

Originally from Georgia, she earned advanced degrees in marine ecology and statistics while also traveling the world. She now lives near Lake Michigan with her French husband, très mignonne daughter, and a veritable zoo of aging pets.

“A world you'll want to inhabit forever!”—Alexandra Bracken on Windwitch

“Featuring vibrant characters and an innovative system of magic...a fast-paced adventure and a wonderful tribute to the power of the binding ties of friendship.”—Jacqueline Carey, New York Times bestselling author, on Truthwitch

“Dennard has upped her game.”—Deseret News on Windwitch

“5 stars: Emotionally charged... with complicated politics and personal relationships that are full of surprises.”—RT Book Reviews, on Windwitch

“Susan Dennard is taking the reins of the genre that is fantasy, making it apparent that she is here to stay and I cannot wait for more of her amazing writing in the future of this series.”—TeenReads on Windwitch