Anger Is a Gift: A Novel (Paperback) 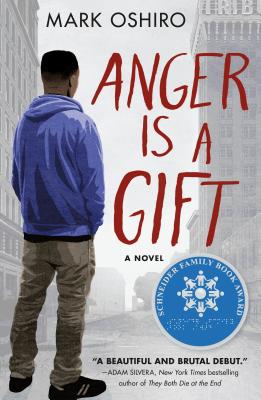 The trade paperback edition of the highly buzzed about YA debut from Mark Oshiro, Anger Is a Gift follows a boy from Oakland as he falls in love amidst the chaos of modern America.

But sometimes Moss still wishes he could be someone else—someone without panic attacks, someone whose father was still alive, someone who hadn’t become a rallying point for a community because of one horrible night.

And most of all, he wishes he didn’t feel so stuck.

Moss can’t even escape at school—he and his friends are subject to the lack of funds and crumbling infrastructure at West Oakland High, as well as constant intimidation by the resource officer stationed in their halls. That was even before the new regulations—it seems sometimes that the students are treated more like criminals.

Something will have to change—but who will listen to a group of teens?

When tensions hit a fever pitch and tragedy strikes again, Moss must face a difficult choice: give in to fear and hate or realize that anger can actually be a gift.

MARK OSHIRO is the Hugo-nominated writer of the online Mark Does Stuff universe (Mark Reads and Mark Watches), where they analyze book and TV series. Their debut novel, Anger Is a Gift, was a recipient of the Schneider Family Book Award for 2019. Their lifelong goal is to pet every dog in the world.

"Anger is a Gift is an explosion of fury and revolution. Mark Oshiro's beautiful and brutal debut proves that not only can anyone be a hero, but great change comes when the heroes work together." —Adam Silvera, New York Times bestselling author of They Both Die at the End

"Raw, unflinching, and full of heart. Anger is a Gift is a masterpiece." —Marieke Nijkamp, #1 New York Times bestselling author of Before I Let Go

“This debut novel provides a riveting, devastatingly realistic portrayal of the criminalization of marginalized groups and an unwavering examination of the lasting impact of bigotry. His teenage characters have authentic intersectional depth and are developed beyond the various ways society labels them: black, Latinx, disabled, Muslim, asexual, nonbinary, gay, lesbian…the narrative is compelling, providing a new and noteworthy account that continues the conversation and depiction of society's opposition to otherness. This is not to be missed and should be placed in a prominent position in every library serving teens.”— Voya, Jewel Davis.

"A strong addition to the current wave of excellent social justice–themed contemporary realistic titles. Give this to fans of Angie Thomas’s The Hate U Give.”—School Library Journal (starred review)

“Oshiro’s novel asks both its characters and its readers what to do next.” —The Bulletin of the Center for Children's Books