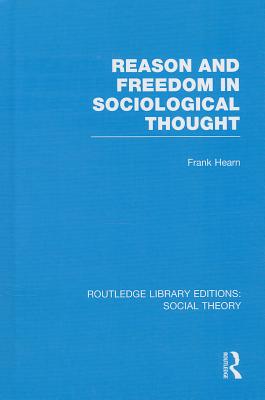 How has reason, believed since the Enlightenment to be the ally of freedom in the search for a better, more humanly satisfying world, been reduced to a technical rationality that has actually impoverished the bases of human freedom? What might be the options and obligations for sociologists who wish to restore reason to its proper status?

Working within the tradition of C. Wright Mills and Jurgen Habermas, Frank Hearn sets out to answer these questions. He surveys the treatment of the relation between reason and freedom in both the classical tradition (especially the writings of Saint-Simon, Comte, Durkheim, Marx, Weber, and Freud) and an increasingly significant segment of social thought and criticism (and, for example, in the contrasting visions of Daniel Bell and Christopher Lasch.) He then analyses both the concrete social and historical forms of expression taken by what Mills calls 'rationality without reason' and their impact on individual autonomy and the freedoms associated with democratic politics. Finally, he develops Mills's and Habermas's claims that the cultivation of democratic publics and a critical social theory committed to a vibrant public life are indispensable to the protection and revitalization of the values of reason and freedom and of the practices they entail.

This book updates and enriches Mills's influential argument by demonstrating its affinity with critical theory, by showing its contributions to a critical understanding of the classical tradition, and by showing its implications for contemporary social, political, and economic developments.