What We Do Now (Paperback) 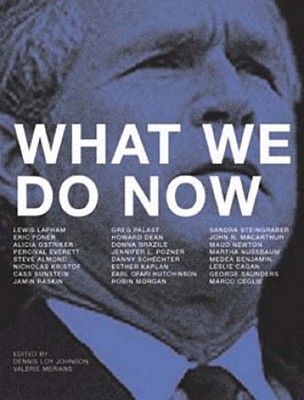 "If you make yourself a sheep, the wolves will eat you." -Benjamin Franklin

In a galvanizing call to arms in the wake of the presidential election, an all-star line-up of leading progressive voices and cultural figures has joined together in a Melville House "instant book" urging opponents of the right not to give in to despair and to launch an immediate counterattack. The project is the result of a round-the-clock effort that saw Howard Dean, Donna Brazile, Greg Palast, Lewis Lapham, Nicholas Kristof and others working through the Thanksgiving holiday to write a series of passionate manifestos outlining a variety of new ideas for life in a post-11/2 world. The result is a powerful collection that also features economists environmentalists, media critics, feminists, anti-war activists, novelists, poets and satirists writing about what to do in their key areas of expertise. "Our feeling was someone had to do something immediately," explains publisher Dennis Loy Johnson, who edited the book along with co-publisher Valerie Merians. "The marvelous energy that had gone into the election was turning into despair, which was only making the rise of the right all the more emphatic." The quality of the contributions is remarkable, adds Merians. "This is no normal 'insta-book,'" she says. "The essays are extremely well written and thought out. We've organized them into a coherent game plan. We've even got an appendix of contact info." "The best part is the heat," says Johnson. "It's really inspiring stuff. People were whooping down the phone line when we called them with the idea. They dropped everything to write all night." WHAT WE DO NOW from Melville House includes: · Howard Dean, Donna Brazile, and Greg Palast on voting reform ... · Lewis Lapham and Nicholas Kristof on how to re-organize the Democratic Party ... · Harper's Magazine publisher John R. MacArthur on supporting labor by fighting free trade · Tax attorney Maud Newton (famous, by the way, for her literary website) on tax reform... · Biologist Sandra Steingraber on renewing the fight for the environment... · Martha Nussbaum on improving international relations... · Cass Sunstein and Jamin Raskin on court reform... · Columbia history professor Eric Foner on keeping a historical perspective ... · Feminist Robin Morgan and Esther Kaplan on countering the rise of fundamentalism in our schools and courts ... · Danny Schechter and feminst Jennifer Pozner on media reform... · Earl Ofari Hutchinson on winning back the black fundamentalist vote... · Leslie Cagan, who organized the giant 500,000 person demonstration during the RNC in August, and Medea Benjamin, who disrupted President Bush's RNC speech, on what activists can do now... · Fiction writers Percival Everett, George Saunders, and Steve Almond, and poet Alicia Ostriker, on the cultural implications, and how to respond... · Billionaires for Bush on how really rich people can work to keep their money... · and more. . .