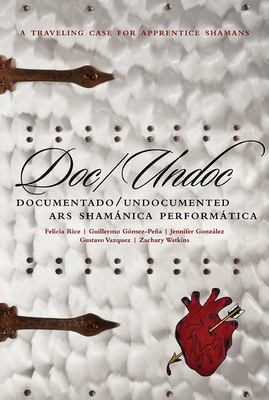 What does it mean to be documented or undocumented? How do these terms work across borders and boundaries, languages and nations?

These are the questions fueling the experimental artwork-in-a-box, Documentado/Undocumented, a book art piece that explores the intersection of printmaking, typography, performance, video, sound art, and installation. In its traveling exhibition, a finely crafted aluminum traveling case is on display, opening into a tri-partite mirrored vanity containing a playful kit of objects, inviting the participant into an intimate space of engagement and transformation. Illuminated buttons trigger layers of audio, and a set of instructions invites the viewer to Reimagine yourself / tell a new story / collaborate with others. Also on display is an exquisite, vividly illustrated codex created by book artist Felicia Rice, with texts drawing upon Mexican performance artist Guillermo G mez-Pe a's experiences and observations of the political, geographic, social, and psychological boundaries between the United States and Mexico. A video loop of G mez-Pe a performing various ritual acts is projected onto the gallery walls.

Doc/Undoc presents this multi-media, multi-disciplinary artists' collaboration in book form, documenting a unique and wildly ambitious adventure into the experimental realms of modern book arts. Included are a lush, photographic recreation of the installation, a reproduction of the codex, an essay by art historian Jennifer A. Gonz lez who situates the project in the context of bookmaking, performance art, and cabinets of curiosities. An introductory essay by Felicia Rice tells the story of the collaboration: its genesis, development, execution, and its ongoing intention. In addition, the book is packaged with a USB drive containing the installation version's original sound art by Zachary James Watkins and video art by Gustavo Vazquez.

Mexican-American performance artist, writer, and activist G mez-Pe a collaborates with Rice, an artist specializing in bookmaking, to recreate an audacious multimedia exhibition in book form. In these collected poem-scripts of his performances, G mez-Pe a foregrounds his personal experience in America as an immigrant in a fearful country, where 'we are constantly being reminded to be afraid, ' and also as an artist negotiating his own self-doubt as well as the stereotypes of both liberal and conservative audiences. The resulting scripts can be bawdy, such as the amusing 'Love Conversation with My Computer, ' or painfully candid, such as 'Dwelling in Unnecessary Wounds, ' where G mez-Pe a wonders, 'Pero, if only I had never left in the first place / what would have become of my life? / It would be considerably simpler.' Clear-eyed about the 'immigration hysteria' in America, G mez-Pe a is too passionate an 'experimental linguist, media pirate' to settle into pessimism, instead riffing on his themes with 'the intensity of a self-inflicted wound or an orgasm' and finding joy in the scrambling of categories, as he imagines an orgiastic 'borderless future' with 'Lacandonian shamans exorcising multinationals at dawn.' His scripts are layered over and under Rice's vivid, colorful sketches of angels, tigers, calaveras, and meticulously decorated El Caminos: all half-satirical, half-devout iconography of Chicano culture. The culmination is a thought-provoking work of art that defies categorization.--Publishers Weekly

Felicia Rice is one of the most exemplary book artists in the United States. Her collaborations with Guillermo G mez-Pe a and Enrique Chagoya have transcended every tradition and formal expectation that we have concerning the book as a work of art. Her new collaboration with G mez-Pe a, Doc/Undoc, is a brilliant exposition of the best of two worlds--art and political action.--Peter Rutledge Koch, The Codex Foundation

The bleeding flaming heart of this book is a cornucopia of shamanic defenses against racism. It's a magical toolbox filled with implements to use for safe border crossings, a prayerbook for the deconstruction of oppressive stereotypes, and a guide for the creation of liberated identities and revolutionary entities. This is not a book to be just read, it's a book to be performed, enacted and realized.--Marshall Weber, Artist/Curator at Booklyn

A fierce and salient cultural intervention, with myriad possibilities. Wild mind shamanic G mez-Pe a imprints his masterful, timeless persona here, as do other collaborators, and book artist Felicia Rice provides a powerful container--a microcosm/macrocosm for immigrant experience. Tactile, visual, expansive, explosive.--Anne Waldman, poet, author of Voice's Daughter of a Heart Yet To Be Born