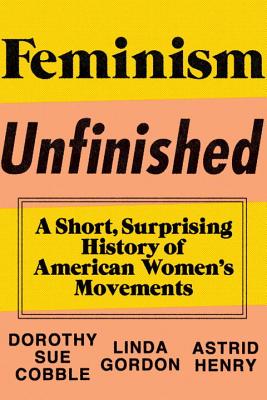 The American women’s movement has been shrouded in myths, argue three leading scholars in this bold and revisionist history.

Eschewing the conventional wisdom that places the origins of the American women’s movement in the nostalgic glow of the late 1960s, Feminism Unfinished traces the beginnings of this seminal American social movement to the 1920s, in the process creating an expanded, historical narrative that dramatically rewrites a century of American women’s history. Also challenging the contemporary “lean-in,” trickle-down feminist philosophy and asserting that women’s histories all too often depoliticize politics, labor issues, and divergent economic circumstances, Dorothy Sue Cobble, Linda Gordon, and Astrid Henry demonstrate that the post-Suffrage women’s movement focused on exploitation of women in the workplace as well as on inherent sexual rights. The authors carefully revise our “wave” vision of feminism, which previously suggested that there were clear breaks and sharp divisions within these media-driven “waves.” Showing how history books have obscured the notable activism by working-class and minority women in the past, Feminism Unfinished provides a much-needed corrective.

Dorothy Sue Cobble lives in Princeton, New Jersey, and teaches at Rutgers University, where she is the Distinguished Professor of History and Labor Studies.

Linda Gordon, winner of two Bancroft Prizes and the Los Angeles Times Book Prize, is the author of The Second Coming of the KKK, Dorothea Lange and Impounded, and the coauthor of Feminism Unfinished. She is the Florence Kelley Professor of History at New York University and lives in New York and Madison, Wisconsin.

Astrid Henry is the Louise R. Noun Chair of Women’s Studies at Grinnell College. She lives in Grinnell, Iowa.

By showing the importance of feminism to so many women of the past, this is a solid push back against the modern reticence to embrace the term and its continued relevance.

Forcefully disrupting misguided clichés, this pointed narrative highlights the transformative ideas and innovations driven by many generations of American women struggling for equal justice and aiming to be individuals and full citizens. Here, the full and continuous range of feminist efforts springs to life, tumultuous and internally varied as it was.
— Nancy F. Cott, Trumbull Professor of American History at Harvard University

Finally, the last one hundred years of US history, but with women in it! Concise, clear, keen—but never oversimplified—Feminism Unfinished is an invitation to understand that powerful philosophy and revolutionary movement.

— Jennifer Baumgardner, author of Look Both Ways and Abortion & Life, and director of It Was Rape

Edgy and important, Feminism Unfinished gives us one hundred years of feminist activism across all divides of class, race, and difference. It is a powerful corrective to hearten us in these mean times: The Global Feminist Movement Is Unfinished, and Everywhere Ongoing.