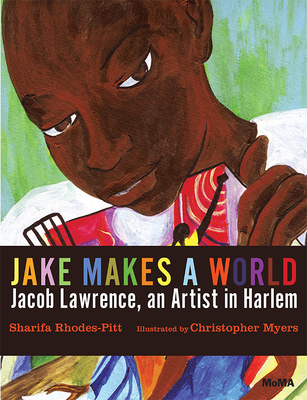 Sharifa Rhodes-Pitts is an award-winning writer and historian whose work has appeared in the New York Times, Harper’s, Vogue, and Essence, among other publications. Originally from Houston, she graduated from Harvard and was a Fulbright Scholar. She lives in New York City.
Christopher Myers is an award-winning author and illustrator of children's books, notably Harlem and Black Cat, which won the Coretta Scott King Award. He lives in New York City.

STARRED REVIEW
“... illustrator Myers has captured the vibrant energy, bold hues, and expressionist shapes of Lawrence’s work. Rhodes-Pitts, meanwhile contributes colorful, energetic text... When an acclaimed author-illustrator team collaborate on a subject who is getting his due at a major museum, you're going to see heightened awareness and interest.”
— Booklist

"Vibrant hues and diagonal elements animate the straightforward accounts of street-corner preachers and checkers players... this is a dynamic and creative introduction to a groundbreaking artist and an iconic collection."
— Kirkus

**STARRED REVIEW**
"...Rhodes-Pitts has written a clear, simple tale, told in present tense and filled with colorful imagery. Myers’s art has a looser, sketchier quality than Lawrence’s more graceful figures, but both artists demonstrate a passion for vibrant, eye-popping colors that powerfully capture the African American experience... VERDICT Creative youngsters may be motivated to craft works about their own neighborhoods."
— School Library Journal