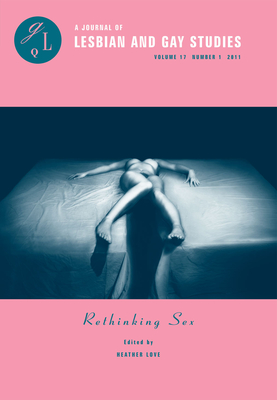 This special issue of GLQ celebrates the twenty-fifth anniversary of the publication of Gayle Rubin's groundbreaking essay, "Thinking Sex: Notes for a Radical Theory of the Politics of Sexuality." Credited with inaugurating the contemporary field of sexuality studies, Rubin's essay calls for an "autonomous theory and politics specific to sexuality." Looking at the intellectual and political gains of sexual freedom movements over the past two decades, "Rethinking Sex" explores the critical and activist afterlife of the controversial 1982 Barnard College Conference on Sexuality, where Rubin originally presented the essay.
In her contribution to this special issue, Rubin reflects on her earlier essay and examines developments in "pro-sex" feminism since the publication of "Thinking Sex." Other noted scholars assess the significance of Rubin's work for histories of sexuality and for new areas in queer studies, such as transgender studies, disability studies, and transnational studies. In honoring Rubin's scholarship, the contributors address the history of sexual theory and politics and the forms that they might take in the twenty-first century.