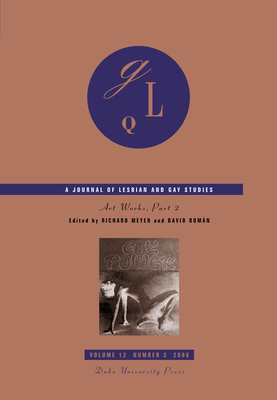 By David Román, Richard Meyer
$13.20
Email or call for price.

Art Works, Parts 1 and 2 address how art, theater, performance, film, and visual culture have reshaped the established terms of gender and sexuality and contributed to fashioning a queer world. Bringing together work from both the visual and the performing arts, each collection showcases cutting-edge research on a wide range of queer artists, media, and sexual subcultures. The contributors to these issues--scholars in art history, visual culture, theater and performance studies, and film and media studies--approach art not as a reflection of history but as a creative response to it, a response that imagines alternative forms of social, sexual, and creative life.

Arguing for the primacy of the arts in queer life, the contributors show how art and performance can constitute a form of critical theorizing rather than simply an illustration of it. In different ways, each author demonstrates how art works to invigorate queer critique. The first issue includes a special dossier on AIDS activist film and video, marking the twenty-fifth year of the AIDS pandemic, and essays on late-nineteenth-century male nudes, lesbian surrealism, homoerotic photography in the Deep South, and the transnational, transgender contexts of the Pulitzer Prize-winning play I Am My Own Wife. Essays in the second issue focus on a series of queer case studies, including gay power graphics and psychedelia, female duets on the Broadway stage, Keith Haring and racial politics, British Vogue in the 1920s, and lesbian-feminist magazines of the 1970s. The issue concludes with a dossier of three shorter pieces on queer art and performance: an interview with the Chicano drag street performer Robert Legoretta ("Cyclona"), an essay on blogs and the Five Lesbian Brothers, and a discussion of a rarely exhibited work about cruising and public space by the contemporary artist Glenn Ligon.