Somebody's Children: The Politics of Transnational and Transracial Adoption (Paperback) 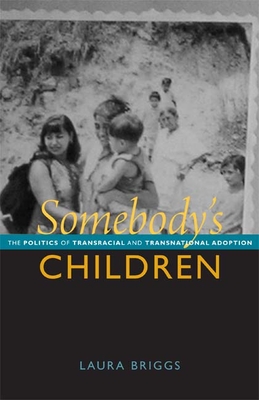 By Laura Briggs
Email or call for price
Special Order

In Somebody's Children, Laura Briggs examines the social and cultural forces--poverty, racism, economic inequality, and political violence--that have shaped transracial and transnational adoption in the United States during the second half of the twentieth century and the first decade of the twenty-first. Focusing particularly on the experiences of those who have lost their children to adoption, Briggs analyzes the circumstances under which African American and Native mothers in the United States and indigenous and poor women in Latin America have felt pressed to give up their children for adoption or have lost them involuntarily.

The dramatic expansion of transracial and transnational adoption since the 1950s, Briggs argues, was the result of specific and profound political and social changes, including the large-scale removal of Native children from their parents, the condemnation of single African American mothers in the context of the civil rights struggle, and the largely invented "crack babies" scare that inaugurated the dramatic withdrawal of benefits to poor mothers in the United States. In Guatemala, El Salvador, and Argentina, governments disappeared children during the Cold War and then imposed neoliberal economic regimes with U.S. support, making the circulation of children across national borders easy and often profitable. Concluding with an assessment of present-day controversies surrounding gay and lesbian adoptions and the struggles of immigrants fearful of losing their children to foster care, Briggs challenges celebratory or otherwise simplistic accounts of transracial and transnational adoption by revealing some of their unacknowledged causes and costs.

Laura Briggs is Chair and Professor of Women, Gender, and Sexuality Studies at the University of Massachusetts Amherst. She is the author of Reproducing Empire: Race, Sex, Science and U.S. Imperialism in Puerto Rico and coeditor of International Adoption: Global Inequalities and the Circulation of Children.