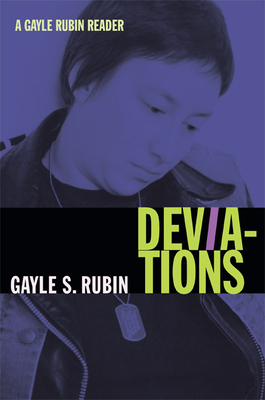 Deviations is the definitive collection of writing by Gayle S. Rubin, a pioneering theorist and activist in feminist, lesbian and gay, queer, and sexuality studies since the 1970s. Rubin first rose to prominence in 1975 with the publication of "The Traffic in Women," an essay that had a galvanizing effect on feminist thinking and theory. In another landmark piece, "Thinking Sex," she examined how certain sexual behaviors are constructed as moral or natural, and others as unnatural. That essay became one of queer theory's foundational texts. Along with such canonical work, Deviations features less well-known but equally insightful writing on subjects such as lesbian history, the feminist sex wars, the politics of sadomasochism, crusades against prostitution and pornography, and the historical development of sexual knowledge. In the introduction, Rubin traces her intellectual trajectory and discusses the development and reception of some of her most influential essays. Like the book it opens, the introduction highlights the major lines of inquiry pursued for nearly forty years by a singularly important theorist of sex, gender, and culture.

Gayle S. Rubin is Associate Professor of Anthropology, Women's Studies, and Comparative Literature at the University of Michigan.