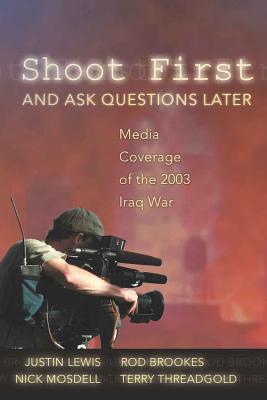 This is book number 7 in the Media and Culture series.

Based on extensive original research, Shoot First and Ask Questions Later provides a comprehensive analysis of media coverage of the war in Iraq in 2003. The authors look closely at the main actors involved through a broad range of interviews with journalists (both embedded and non-embedded), news editors, news heads, and with key planners at the Pentagon and the UK Ministry of Defence. This book also investigates how the war was represented on television, employing both a systematic content analysis of the broadcast news coverage of the war and a series of case studies that unravel key moments of good and bad reporting during the war. Finally, it examines how people responded to and interpreted the information they received from the media, drawing upon both large-scale surveys and focus groups.
What emerges, for all its blemishes, is a picture of a sophisticated, military public-relations campaign - one that had less to do with censorship than with promoting certain kinds of coverage. At the heart of this was the embedded journalists program, which has clearly changed the way war is reported. In future, the authors argue, journalists need to understand their role in this public relations effort, and to ask questions not only when access is denied, but also when it is granted.