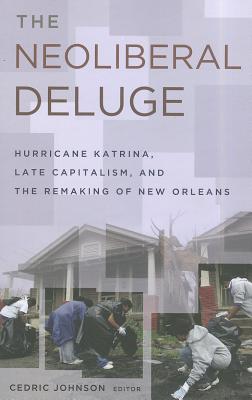 Katrina was not just a hurricane. The death, destruction, and misery wreaked on New Orleans cannot be blamed on nature’s fury alone. This volume of essays locates the root causes of the 2005 disaster squarely in neoliberal restructuring and examines how pro-market reforms are reshaping life, politics, economy, and the built environment in New Orleans.

The authors—a diverse group writing from the disciplines of sociology, political science, education, public policy, and media theory—argue that human agency and public policy choices were more at fault for the devastation and mass suffering experienced along the Gulf Coast than were sheer forces of nature. The harrowing images of flattened homes, citizens stranded on rooftops, patients dying in makeshift hospitals, and dead bodies floating in floodwaters exposed the moral and political contradictions of neoliberalism—the ideological rejection of the planner state and the active promotion of a new order of market rule.

Many of these essays offer critical insights on the saga of postdisaster reconstruction. Challenging triumphal narratives of civic resiliency and universal recovery, the authors bring to the fore pitched battles over labor rights, gender and racial justice, gentrification, the development of city master plans, the demolition of public housing, policing, the privatization of public schools, and roiling tensions between tourism-based economic growth and neighborhood interests. The contributors also expand and deepen more conventional critiques of “disaster capitalism” to consider how the corporate mobilization of philanthropy and public good will are remaking New Orleans in profound and pernicious ways.

Cedric Johnson is associate professor of political science at Hobart and William Smith Colleges. He is the author of Revolutionaries to Race Leaders: Black Power and the Making of African American Politics (Minnesota, 2007).

"This is a very important volume that all people interested in the Katrina disaster, governance, and American politics should read. In this book, Cedric Johnson and the other contributors reframe our understanding of the disaster by highlighting the role of neoliberalism in shaping both the preconditions for and response to this crisis. Those who read this book will come away with deeper knowledge of the meaning and work of neoliberalism over the last quarter century." —Cathy Cohen, University of Chicago