A Promise And A Way Of Life: White Antiracist Activism (Paperback) 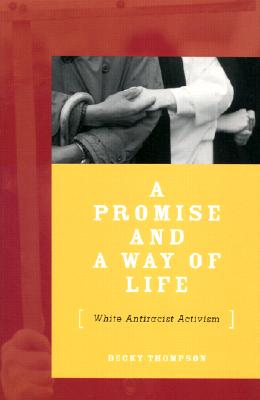 The first in-depth look at white people’s activism in fighting racism during the past fifty years.

Not since the Civil Rights Movement of the 1950s and 1960s, when many white college students went south to fight against Jim Crow laws, has white antiracist activity held the public’s attention. Yet there have always been white people involved in fighting racism. In this passionate work, Becky Thompson looks at white Americans who have struggled against racism, offering examples of both successes and failures, inspirations, practical philosophies, and a way ahead.

A Promise and a Way of Life weaves an account of the past half-century based on the life histories of thirty-nine people who have placed antiracist activism at the center of their lives. Through a rich and fascinating narrative that links individual experiences with social and political history, Thompson shows the ways, both public and personal, in which whites have opposed racism during several social movements: the Civil Rights and Black Power movements, multiracial feminism, the Central American peace movement, the struggle for antiracist education, and activism against the prison industry. Beginning with the diverse catalysts that started these activists on their journeys, this book demonstrates the contributions and limitations of white antiracism in key social justice movements.

Through these stories, crucial questions are raised: Does antiracist work require a repudiation of one’s whiteness or can that identity be transformed through political commitment and alliances? What do white people need to do to undermine white privilege? What would it take to build a multiracial movement in which white people are responsible for creating antiracist alliances while not co-opting people of color?

Unique in its depth and thoroughness, A Promise and a Way of Life is essential for anyone currently fighting racism or wondering how to do so. Through its demonstration of the extraordinary personal and social transformations ordinary people can make, it provides a new paradigm for movement activity, one that will help to incite and guide future antiracist activism.

Becky Thompson is associate professor of sociology at Simmons College. She is the author of Mothering without a Compass (2000) and A Hunger So Wide and So Deep (1994), both published by Minnesota.

"Drawing on the stories of living people rather than on archives, Thompson finds the origins of white anti-racism not in the abolition movement of the early 1800s but in the civil rights movement of the 1950s South. . . . For readers looking for an anti-racist interpretation of the feminist movement, the chapter on Multiracial Feminism is a must-read. . . . By showing the various ways in which white people have become invested in anti-racist struggle, Thompson opens up a whole new world of ideas and practices located as ‘white’ but oriented toward social justice. For those of us stranded in the great white North, this book will be indispensable."—Women’s Review of Books

"Becky Thompson weaves interviews with white antiracist activists and theoretical analyses of racial domination to create a social history of white, American antiracist activism from the 1950s to the present. Thompson rewrites the standard history of the women’s movement. The histories of her admirable activists provide some practical inspiration."—NWSA Journal

"A thorough history that can offer valuable guidance to contemporary activists."—Bitch Magazine

"A Promise and a Way of Life, which relies primarily on a series of interviews with 39 anti-racist activists across a spectrum of progressive social movements, explores the variety of ways these individuals have worked-publicly and privately-to oppose racism and create multi-racial communities. It highlights the conflicts, successes, and limitations of these efforts in the past and attempts to draw lessons for current and future political activism. A Promise and a Way of Life is a valuable addition to the burgeoning history of post-war political history as well as a practical guide for white activists still concerned with racial justice. At every stage, Thomspson provides a fresh approach to old subjects and a new spin on well-worn historical assumptions. By highlighting the under-appreciated contributions of white activists to movements for racial justice over four decades, Thompson has enriched our understanding of progressive social change. Consequently, this book should be of use to a diverse array of scholars and activists alike and deserves a place in intermediate-level college courses."—Labour/Le Travail

"Becky Thompson tells the life histories of 30 antiracist activists from the past half-century. An engaging, narrative style make this academic text accessible to the general reader."—Reference and Research Book News

"Becky Thompson shows how our lives are shaped by our experience of the surrounding world, and how we in turn shape that world. A Promise and a Way of Life is thorough and well documented, interesting, and informative."—Quaker Life

"Descriptive and passionate, A Promise and a Way of Life is useful in offering revealing portraits of white antiracist activists."—CHOICE

"Here is a fascinating collective portrait of an extraordinary group of white people who fought racism, often at great risk. Becky Thompson traces the background, the thinking, the actions of these people over a period of fifty years, as they participated in the most important social movements of our time. Her book is a valuable addition to the history of social movements in the 20th century."—Howard Zinn

"Becky Thompson shares the stories of radical and revolutionary white antiracist activists and political prisoners. Marilyn Buck, Ray Luc Levasseur, and David Gilbert are among the visionaries struggling to for a just and humane world whose voices are found in this book, important reading for those critiquing and confronting racial and state dominance."—Joy James, author of Resisting State Violence and editor of States of Confinement: Policing, Detention and Prisons

"Becky Thompson’s A Promise and a Way of Life is a labor of love. She finds and interviews an incredible range of white anti-racist activists. Then she carefully and passionately constructs a history of the last half century of anti-racist activism within a larger narrative of social and political movements led by people of color. Thompson documents the way of life of white people who commit their lives to work for racial justice and thus helps to move us closer to the ‘promise’ of new and more humane ways of being. I found it incredibly helpful."—Mab Segrest, author of Memoirs of a Race Traitor