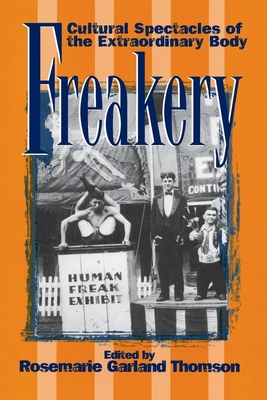 Giants. Midgets. Tribal non-Westerners. The very fat. The very thin. Hermaphrodites. Conjoined twins. The disabled. The very hirsute. In American history, all have shared the platform equally, as freaks, human oddities, their only commonality their assigned role of anomalous other to the gathered throngs. For the price of a ticket, freak shows offered spectators an icon of bodily otherness whose difference from them secured their own membership in a common American identity--by comparison ordinary, tractable, normal.

Rosemarie Thomson's groundbreaking anthology probes America's disposition toward the visually different. The book's essays fall into four main categories: historical explorations of American freak shows in the era of P.T. Barnum; the articulation of the freak in literary and textual discourses; contemporary relocations of freak shows; and theoretical analyses of freak culture. Essays address such diverse topics as American colonialism and public presentations of natives; laughing gas demonstrations in the 1840's; Shirley Temple and Tom Thumb; Todd Browning's landmark movie Freaks; bodybuilders as postmodern freaks; freaks in Star Trek; Michael Jackson's identification with the Elephant Man; and the modern talk show as a reconfiguration of the freak show. In her introduction, Thomson traces the freak show from antiquity to the modern period and explores the constitutive, political, and textual properties of such exhibits.