More Beautiful and More Terrible: The Embrace and Transcendence of Racial Inequality in the United States (Paperback) 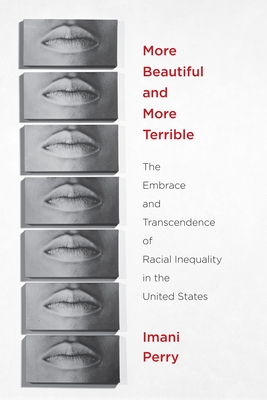 For a nation that often optimistically claims to be post-racial, we are still mired in the practices of racial inequality that plays out in law, policy, and in our local communities. One of two explanations is often given for this persistent phenomenon: On the one hand, we might be hypocritical--saying one thing, and doing or believing another; on the other, it might have little to do with us individually but rather be inherent to the structure of American society. More Beautiful and More Terrible compels us to think beyond this insufficient dichotomy in order to see how racial inequality is perpetuated. Imani Perry asserts that the U.S. is in a new and distinct phase of racism that is "post-intentional" neither based on the intentional discrimination of the past, nor drawing upon biological concepts of race. Drawing upon the insights and tools of critical race theory, social policy, law, sociology and cultural studies, she demonstrates how post-intentional racism works and maintains that it cannot be addressed solely through the kinds of structural solutions of the Left or the values arguments of the Right. Rather, the author identifies a place in the middle--a space of "righteous hope"--and articulates a notion of ethics and human agency that will allow us to expand and amplify that hope. To paraphrase James Baldwin, when talking about race, it is both more terrible than most think, but also more beautiful than most can imagine, with limitless and open-ended possibility. Perry leads readers down the path of imagining the possible and points to the way forward.

Imani Perry is Professor at the Center for African American Studies at Princeton University. She holds a Ph.D. in American Civilization and a J.D. both from Harvard and is the author of Prophets of the Hood: Politics and Poetics in Hip Hop.