Women of Color and the Reproductive Rights Movement (Paperback) 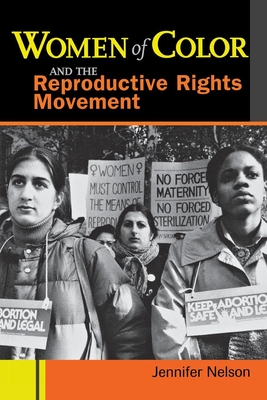 Uncovers the truth behind the ideas, struggles, and eventually success of Black and Puerto Rican Nationalists regarding key feminist issues of the 1960s, 1970s, and 1980s

While most people believe that the movement to secure voluntary reproductive control for women centered solely on abortion rights, for many women abortion was not the only, or even primary, focus. Jennifer Nelson tells the story of the feminist struggle for legal abortion and reproductive rights in the 1960s, 1970s, and early 1980s through the particular contributions of women of color. She explores the relationship between second-wave feminists, who were concerned with a woman's right to choose, Black and Puerto Rican Nationalists, who were concerned that Black and Puerto Rican women have as many children as possible "for the revolution," and women of color themselves, who negotiated between them. Contrary to popular belief, Nelson shows that women of color were able to successfully remake the mainstream women's liberation and abortion rights movements by appropriating select aspects of Black Nationalist politics--including addressing sterilization abuse, access to affordable childcare and healthcare, and ways to raise children out of poverty--for feminist discourse.

Jennifer Nelson is Director of the Women's and Gender Studies Program at the University of Redlands (CA).