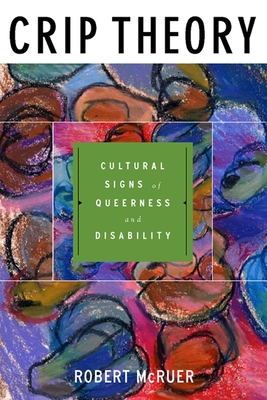 Crip Theory attends to the contemporary cultures of disability and queerness that are coming out all over. Both disability studies and queer theory are centrally concerned with how bodies, pleasures, and identities are represented as "normal" or as abject, but Crip Theory is the first book to analyze thoroughly the ways in which these interdisciplinary fields inform each other.

Drawing on feminist theory, African American and Latino/a cultural theories, composition studies, film and television studies, and theories of globalization and counter-globalization, Robert McRuer articulates the central concerns of crip theory and considers how such a critical perspective might impact cultural and historical inquiry in the humanities. Crip Theory puts forward readings of the Sharon Kowalski story, the performance art of Bob Flanagan, and the journals of Gary Fisher, as well as critiques of the domesticated queerness and disability marketed by the Millennium March, or Bravo TV's Queer Eye for the Straight Guy. McRuer examines how dominant and marginal bodily and sexual identities are composed, and considers the vibrant ways that disability and queerness unsettle and re-write those identities in order to insist that another world is possible.

Robert McRuer is Associate Professor of English at George Washington University. He is the author of The Queer Renaissance: Contemporary American Literature and the Reinvention of Lesbian and Gay Identities (also available from NYU Press) and co-editor, with Abby L. Wilkerson, of Desiring Disability: Queer Theory Meets Disability Studies, a special issue of GLQ.