Carryin' on in the Lesbian and Gay South (Hardcover) 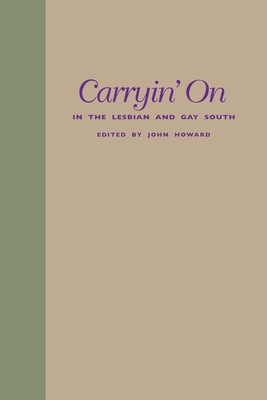 To date, lesbian and gay history has focused largely on the East and West coasts, and on urban settings such as New York and San Francisco. The American South, on the other hand, identified with religion, traditional gender roles, and cultural conservatism, has escaped attention. Southerners celebrate their past; lesbians and gays celebrate their new-found visibility; historians celebrate the South--yet rarely have the three crossed paths. John Howard's groundbreaking anthology casts its net widely, examining lesbian and gay experiences in Mississippi, South Carolina, Georgia, Florida, Louisiana, and Tennessee. James Schnur, by virtue of a Freedom of Information Act query, sheds light on the sinister machinations of the Johns Committee, whose clandestine duty it was to ferret out suspected homosexuals during the McCarthy years. In his essay on the great Southern writer William Alexander Percy, William Armstrong Percy provides tangible evidence that Southern citizens, historians, and archivists have long sought to repress or obscure certain individuals within what C. Vann Woodward described as the perverse section. Moving chronologically through America's past, from the antebellum and postbellum periods, through the Jim Crow era and the Cold War, to the present, this volume introduces an important new framework to the field of lesbian and gay history--that of regional history.

Senior associate editor of "Southern Historian" and a native Southerner, John Howard is Director of the Center for Lesbian, Gay, and Bisexual Life and Visiting Instructor of History at Duke University.