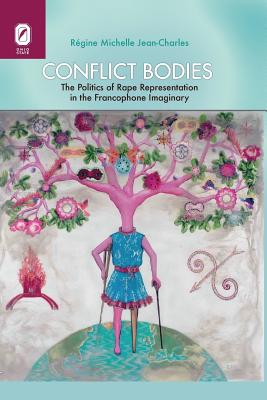 Conflict Bodies: The Politics of Rape Representation in the Francophone Imaginary explores the relationship between rape and narratives of violence in francophone literature and culture. The book offers ways to account for the raped bodies beneath the conflicts of slavery, genocide, dictatorship, natural disasters and war—and to examine why doing so is necessary. Through a feminist analysis of the rhetoric and representation of rape in francophone African and Caribbean cultural production, Conflict Bodies examines theoretical, visual, and literary texts that challenge the dominant views of postcolonial violence. Using an interdisciplinary and comparative framework to consider different contexts—Haiti, Guadeloupe, Rwanda, and Democratic Republic of the Congo—Régine Michelle Jean-Charles illuminates how analyzing survivors’ subjectivities, stories, and embodied experiences provides a nuanced understanding of what is at stake in rape representation. Referencing theories from francophone literary studies, transnational black feminisms, and rape cultural criticism to analyze novels, film, photography, drama, and documentaries, Jean-Charles argues that in today’s global climate—where one in three women worldwide has been raped, rape is being used as a tool of war, and rape myths circulate with vehemence—traditional “scripts of violence” that fail to account for sexual violence demand refusal, re-thinking, and re-imagining.

Régine Michelle Jean-Charles is assistant professor of romance languages and literatures and in the African and African Diaspora Studies Program at Boston College.


“The notion of ‘conflict bodies’ resonates not only with ‘conflict zones’ but with the popular expression ‘conflict diamonds/?minerals,’ all of which are appropriate here. Régine Michelle Jean-Charles skillfully traces and examines the literary representation of violence against Francophone African and Caribbean women. She frames her argument around current theories of subjectivity, the body, trauma, and rape, for example, and incorporates anthropology, black feminist theory, and philosophy while making links to issues of freedom and human rights. Her study is extremely informative and valuable.” —Renee Larrier, professor of French, Rutgers University