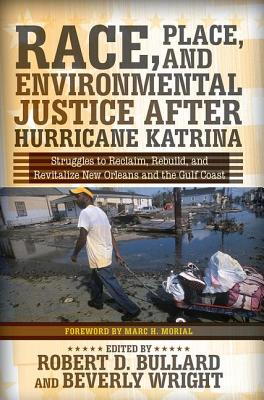 On August 29, 2005, Hurricane Katrina made landfall near New Orleans leaving death and destruction across the Louisiana, Mississippi, and Alabama Gulf Coast counties. The lethargic and inept emergency response that followed exposed institutional flaws, poor planning, and false assumptions that are built into the emergency response and homeland security plans and programs. Questions linger: What went wrong? Can it happen again? Is our government equipped to plan for, mitigate, respond to, and recover from natural and manmade disasters? Can the public trust government response to be fair? Does race matter? Racial disparities exist in disaster response, cleanup, rebuilding, reconstruction, and recovery. Race plays out in natural disaster survivors' ability to rebuild, replace infrastructure, obtain loans, and locate temporary and permanent housing. Generally, low-income and people of color disaster victims spend more time in temporary housing, shelters, trailers, mobile homes, and hotels - and are more vulnerable to permanent displacement. Some 'temporary' homes have not proved to be that temporary. In exploring the geography of vulnerability, this book asks why some communities get left behind economically, spatially, and physically before and after disasters strike.

Robert D. Bullard is Ware Distinguished Professor of Sociology and director of the Environmental Justice Resource Center at Clark Atlanta University. Often considered the "father" of the environmental justice movement, he is the author of Dumping in Dixie: Race, Class, and Environmental Quality(Westview Press, 2000). Beverly Wright is a sociologist and the founding director of the Deep South Center for Environmental Justice at Dillard University in New Orleans. A New Orleans native and Hurricane Katrina survivor, she is the author of In the Wake of the Storm (2006) and Toxic Wastes and Race at Twenty (2007).

“There have been many books written about Hurricane Katrina but none has the range and power of Race, Place, and Environmental Justice After Hurricane Katrina. Bullard, Wright, and the contributors cover all the issues: the pre-existing social and environmental injustices, the lack of preparation for disaster, and the skewed political and economic structure that made sure that Katrina’s wrath would be felt most sharply in low-income communities of color. But most significantly, they offer one of the most detailed, analytical, and rigorous looks at the aftermath: the toxic soup left behind, the economic, physical and social challenges of rebuilding, and the shifting demographics and politics of New Orleans. This is a must-read for anyone concerned with the devastating effects Katrina had on Louisiana and the nation, and a worthy anchor text for courses on environmental justice, social inequality, and the American future.”
—Manuel Pastor, University of Southern California


“Race, Place, and Environmental Justice reveals how the political disasters confronting New Orleans before Katrina and in the rebuilding process afterwards wreaked far more damage on the city than the storm itself, a context that unfortunately prevails in virtually every major US city.”
—Gregory D. Squires, George Washington University

“The natural disaster of Katrina played out across a social landscape of racial injustice and savage inequality. Bullard and Wright have assembled a fascinating set of pioneering works on the antecedents, the storm, and the aftermath, providing key lessons for rebuilding New Orleans and our broader society. A major contribution to our understanding of who suffers from so- called natural disasters and how to recover.”
—J. Timmons Roberts, The College of William and Mary


“This heavily researched and annotated collection of essays on the ‘geography of vulnerability’ as found in the aftermath of Katrina is an overwhelming analysis of a microcosm of American society. Written by experts in environmental justice, land-use policy, and political science, it addresses everything from transportation infrastructure to social inequality and urban development. … With solid, fact-based conclusions, responsible recommendations, and chapters on rebuilding efforts, this title should serve as a textbook for today’s urban planners.”
—Booklist