Counterculture Through the Ages: From Abraham to Acid House (Paperback) 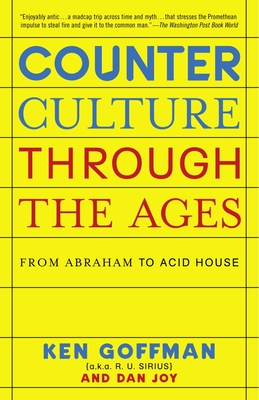 As long as there has been culture, there has been counterculture. At times it moves deep below the surface of things, a stealth mode of being all but invisible to the dominant paradigm; at other times it’s in plain sight, challenging the status quo; and at still other times it erupts in a fiery burst of creative–or destructive–energy to change the world forever.

But until now the countercultural phenomenon has been one of history’s great blind spots. Individual countercultures have been explored, but never before has a book set out to demonstrate the recurring nature of counterculturalism across all times and societies, and to illustrate its dynamic role in the continuous evolution of human values and cultures.

Countercultural pundit and cyberguru R. U. Sirius brilliantly sets the record straight in this colorful, anecdotal, and wide-ranging study based on ideas developed by the late Timothy Leary with Dan Joy. With a distinctive mix of scholarly erudition and gonzo passion, Sirius and Joy identify the distinguishing characteristics of countercultures, delving into history and myth to establish beyond doubt that, for all their surface differences, countercultures share important underlying principles: individualism, anti-authoritarianism, and a belief in the possibility of personal and social transformation.

Ranging from the Socratic counterculture of ancient Athens and the outsider movements of Judaism, which left indelible marks on Western culture, to the Taoist, Sufi, and Zen Buddhist countercultures, which were equally influential in the East, to the famous countercultural moments of the last century–Paris in the twenties, Haight-Ashbury in the sixties, Tropicalismo, women’s liberation, punk rock–to the cutting-edge countercultures of the twenty-first century, which combine science, art, music, technology, politics, and religion in astonishing (and sometimes disturbing) new ways, Counterculture Through the Ages is an indispensable guidebook to where we’ve been . . . and where we’re going.

Ken Goffman, a.k.a. R. U. Sirius, is a well-known cultural commentator and co-founder of Mondo 2000, the iconoclastic magazine that defined the digital culture of the early nineties. He is author or editor of seven books, including Mondo 2000: A User's Guide to the New Edge and The Revolution, and co-wrote Timothy Leary's last book, Design for Dying. He was a columnist for Artforum International and the San Francisco Examiner. He lectures internationally on subjects ranging from the implications of new technology to alternative politics. He lives in Mill Valley, California.

Dan Joy is a writer, editor, and inadvertent performance artist from San Francisco.

“In an age of corporate cool-hunting and target-marketed faux rebellion, along comes an inspirational work of scholarship to remind us of just how beyond ‘cool’ true rebels really are, and have always been. I am forever grateful to Ken Goffman for serving as my first guide through the starlit mire of countercultural thought and activity. Read this book, by all means. He knows his way around.”
–DOUGLAS RUSHKOFF, author of Cyberia, Media Virus, Ecstasy Club, and Nothing Sacred

“Being of the same energy field myself, I now throw a sack full of gold dust into the arena and dare anyone to be either funnier or smarter than this R. U. Sirius.”
–ANDREI CODRESCU

“This is a brilliant book. R. U. Sirius lived and created the cyberpunk culture in the 1980s. Now he and coauthor Dan Joy have written a sweeping history of countercultures through the ages, starting with the myth that still helps define our relationship with technology, that of the fire-snatching hacker Prometheus. Defying authority with creative edge has been a powerful force throughout history, and R. U. Sirius captures the magic with the authentic insight of someone who's been a rider on that wave.”
-Walter Isaacson, former chairman and ceo of CNN, author of Benjamin Franklin: an American Life

"Edge-thinker and media rabble-rouser Ken Goffman has done us all a great service with his entertaining and enlightening book Counterculture Through the Ages. With passion and wry humor, Goffman unfurls a secret history of rebels, ranters, mystics, and bohos united by their distrust of authority. By placing more recent social struggles in this juicy (and sometimes hilarious) context, Goffman and coauthor Dan Joy reveal the deeper dimensions of our current quest for freedom and fun in a shrinking world of surveillance and control."
-Erik Davis, author of Techgnosis: Myth, Magic, and Mysticism in the Age of Information