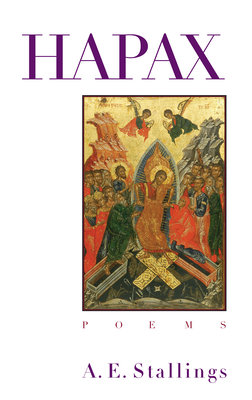 Hapax is ancient Greek for "once, once only, once and for all," and "onceness" pervades this second book of poems by American expatriate poet A. E. Stallings. Opening with the jolt of "Aftershocks," this book explores what does and does not survive its "gone moment"-childhood ("The Dollhouse"), ancient artifacts ("Implements from the Grave of the Poet"), a marriage's lost moments of happiness ("Lovejoy Street"). The poems also often compare the ancient world with the modern Greece where Stallings has lived for several years. Her musical lyrics cover a range of subjects from love and family to characters and themes derived from classical Greek sources ("Actaeon" and "Sisyphus").

Employing sonnets, couplets, blank verse, haiku, Sapphics, even a sequence of limericks, Stallings displays a seemingly effortless mastery of form. She makes these diverse forms seem new and relevant as modes for expressing intelligent thought as well as charged emotions and a sense of humor. The unique sensibility and linguistic freshness of her work has already marked her as an important, young poet coming into her own.

A. E. Stallings was born in 1968 and grew up in Decatur, GA. She studied classics at the University of Georgia and Oxford University. Her first poetry collection, Archaic Smile (University of Evansville Press, 1999) was awarded the 1999 Richard Wilbur Award. Her poetry has appeared in The Best American Poetry series (1994 & 2000) and has received numerous awards, including the 2004 Frederick Bock Prize from Poetry and the 2004 Nemerov Sonnet Award from the Formalist. She has recently completed a verse translation of Lucretius' De Rerum Natura for Penguin Classics. Stallings lives in Athens, Greece with her husband, John Psaropoulos, editor of the Athens News, and their son, Jason.

"[O]ne of the strongest talents to emerge in recent years." --<i>Poetry</i>


"Stallings demonstrates formidable confidence in her technical skill, exploring fixed forms, tinking with traditions, and creating her own combinations of meter and rhyme. She also takes chances."  --Harvard Review

"This is a startling first book of poems, charged with so much energy that it practically kicks the reader in the teeth. Readers who expect poetry to give them a refreshing jolt will by regaled . . . It is a pleasure to hail the arrival of A. E. Stallings." --X. J. Kennedy, <i>The Classical Outlook</i>