The Sound of Silence: Growing Up Hearing with Deaf Parents (Hardcover) 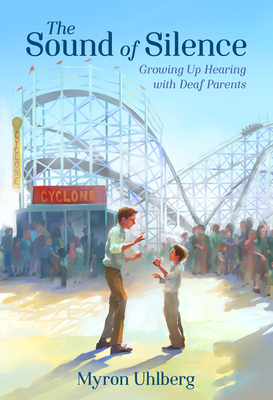 Myron Uhlberg was born the hearing son of deaf parents at a time when American Sign Language was not well established and deaf people were often dismissed as being unintelligent. In this young reader adaptation of his acclaimed memoir, Hands of My Father, Uhlberg recalls the daily difficulties and hidden joys of growing up as the intermediary between his parents’ silent world and the world of the hearing.

Myron Uhlberg is the award-winning and critically acclaimed author of several books, including the picture books Dad, Jackie, and Me; A Storm Called Katrina; and The Sound of All Things, as well as the adult memoir Hands of My Father, upon which The Sound of Silence is based. He was born in Brooklyn, New York, and was the firstborn son of two deaf parents. Upon graduating college, he enlisted in the US Army and served as a paratrooper. After spending thirty-five years in the fashion business and running twenty marathons in his spare time, he returned to his first love: writing books for young readers. Myron now lives in California.

"This book is a gem—full of wisdom, love, laughter…We live in a noisy world. Sometimes it takes a beautiful storyteller like Myron Uhlberg to remind us of the world’s quiet and graceful charms." —Jonathan Eig, New York Times best-selling author of Ali: A Life and Luckiest Man

"A sweet, satisfying memoir about family bonds and finding one's place in the world." —Kirkus Reviews

"Like the spectacular memoir upon which this has been drawn, The Sound of Silence starts with magnificent force and control and never lets up. This is a moving, joyous, dramatic work of art, a gift of unusual understanding and grace." —Ken Burns, Academy Award-nominated filmmaker

"Myron’s relationship with his father is at once complicated and touching, and his descriptions of signing, particularly his father’s, are both educational and profound. An unforgettable story that opens hearts and minds to Deaf culture." —Booklist