The War on Neighborhoods: Policing, Prison, and Punishment in a Divided City (Paperback) 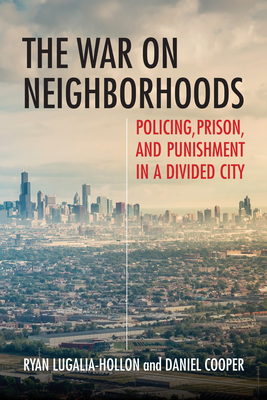 A narrative-driven exploration of policing and the punishment of disadvantage in Chicago, and a new vision for repairing urban neighborhoods

For people of color who live in segregated urban neighborhoods, surviving crime and violence is a generational reality. As violence in cities like New York and Los Angeles has fallen in recent years, in many Chicago communities, it has continued at alarming rates. Meanwhile, residents of these same communities have endured decades of some of the highest rates of arrest, incarceration, and police abuse in the nation.

The War on Neighborhoods argues that these trends are connected. Crime in Chicago, as in many other US cities, has been fueled by a broken approach to public safety in disadvantaged neighborhoods. For nearly forty years, public leaders have attempted to create peace through punishment, misinvesting billions of dollars toward the suppression of crime, largely into a small subset of neighborhoods on the city’s West and South Sides. Meanwhile, these neighborhoods have struggled to sustain investments into basic needs such as jobs, housing, education, and mental healthcare.

When the main investment in a community is policing and incarceration, rather than human and community development, that amounts to a “war on neighborhoods,” which ultimately furthers poverty and disadvantage. Longtime Chicago scholars Ryan Lugalia-Hollon and Daniel Cooper tell the story of one of those communities, a neighborhood on Chicago’s West Side that is emblematic of many majority-black neighborhoods in US cities. Sharing both rigorous data and powerful stories, the authors explain why punishment will never create peace and why we must rethink the ways that public dollars are invested into making places safe.

The War on Neighborhoods makes the case for a revolutionary reformation of our public-safety model that focuses on shoring up neighborhood institutions and addressing the effects of trauma and poverty. The authors call for a profound transformation in how we think about investing in urban communities—away from the perverse misinvestment of policing and incarceration and toward a model that invests in human and community development.

Ryan Lugalia-Hollon has worked in youth development for over twenty years, including restorative justice, violence prevention, and trauma-informed care efforts in Chicago. He currently leads an education network in San Antonio, Texas.

Daniel Cooper works with organizations in Chicago on issues such as violence prevention, justice system reform, community development, and health equity. He is the founding executive director of the Center for Equitable Cities at Adler University in Chicago.

“Lugalia-Hollon and Cooper call for a domestic Marshall Plan to boost employment, health, and education, and urge policymakers to focus on removing problem situations, rather than problem people.”
—Booklist

“The message that The War on Neighborhoods offers [is that] we must begin to challenge the narratives that have marginalized communities like Austin and that falsely pit communities against one another.”
—Tikkun Magazine

“The War on Neighborhoods reveals, in chilling detail, what our collective delusions about safety have done to vulnerable communities and how unsafe we have made the places we police most heavily. It also lays the groundwork for imagining a future in which we overcome what the authors call our ‘addiction to punishment.’”
—Eula Biss, author of On Immunity and Notes from No Man’s Land

“Clear-eyed and insightful, The War on Neighborhoods illuminates the structural forces that shape the course of mass criminalization in communities of color. This book is a cautionary tale about current approaches to violence and harm, and a compelling call to action to every one of us.”
—Andrea J. Ritchie, author of Invisible No More: Police Violence Against Black Women and Women of Color

“Beyond national headlines on murder rates and inept government, Ryan Lugalia-Hollon and Daniel Cooper dig deeper to reveal the oft-missing story of disinvestment, displacement, and the structured disposability of black and brown people. A truly important read for those interested in the life of cities.”
—David Stovall, coauthor of Twenty-First-Century Jim Crow Schools

“Lugalia-Hollon and Cooper’s argument is both simple and devastating: America’s legal system has never and will never lead to safer communities. Beautifully written and painstakingly researched, the authors show us how divesting our public dollars from mass incarceration and instead investing in human potential is the only humane, economical, and effective long-term solution to harm.”
—Purvi Shah, cofounder of Law for Black Lives

“Buttressed by evocative stories and persuasive data, The War on Neighborhoods makes the case that entire communities have been at once abandoned by capital and targeted by the punishing state. This book is a clarion call to address the impacts of disinvestment and racialized/gendered criminalization on generations of people living on the West Side of Chicago and across the country. Everyone should read this book.”
—Mariame Kaba, founder and director of Project NIA

“As a lifelong advocate for greater investments in youth and families, I was both educated and reinvigorated by reading The War on Neighborhoods. This book reminds us to act fast and be bold with those investments if we hope to turn this long tide of racial and economic injustice.”
—Elizabeth Gaines, senior fellow, Forum for Youth Investment