God in Captivity: The Rise of Faith-Based Prison Ministries in the Age of Mass Incarceration (Paperback) 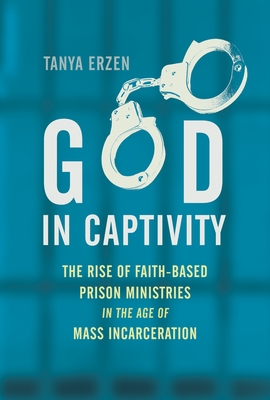 By Tanya Erzen
Email or call for price
Special Order

It is by now well known that the United States’ incarceration rate is the highest in the world. What is not broadly understood is how cash-strapped and overcrowded state and federal prisons are increasingly relying on religious organizations to provide educational and mental health services and to help maintain order. And these religious organizations are overwhelmingly run by nondenominational Protestant Christians who see prisoners as captive audiences.

Some twenty thousand of these Evangelical Christian volunteers now run educational programs in over three hundred US prisons, jails, and detention centers. Prison seminary programs are flourishing in states as diverse as Texas and Tennessee, California and Illinois, and almost half of the federal prisons operate or are developing faith-based residential programs. Tanya Erzen gained inside access to many of these programs, spending time with prisoners, wardens, and members of faith-based ministries in six states, at both male and female penitentiaries, to better understand both the nature of these ministries and their effects. What she discovered raises questions about how these ministries and the people who live in prison grapple with the meaning of punishment and redemption, as well as what legal and ethical issues emerge when conservative Christians are the main and sometimes only outside forces in a prison system that no longer offers even the pretense of rehabilitation. Yet Erzen also shows how prison ministries make undeniably positive impacts on the lives of many prisoners: men and women who have no hope of ever leaving prison can achieve personal growth, a sense of community, and a degree of liberation within the confines of their cells.

With both empathy and a critical eye, God in Captivity grapples with the questions of how faith-based programs serve the punitive regime of the prison, becoming a method of control behind bars even as prisoners use them as a lifeline for self-transformation and dignity.

Tanya Erzen is an associate professor of religion and gender studies at the University of Puget Sound and the executive director of the Freedom Education Project Puget Sound, a nonprofit that provides college education for incarcerated women. A former Soros Justice Media Fellow, she is the author of Straight to Jesus, Fanpire, and Zero Tolerance.

“For those who operate within the carceral complex, this book is an important read. For those who seek to better understand the complicated ways in which religion and incarceration mingle, it is a required read.”
—The New York Journal of Books

“Erzen is a talented writer whose prose is accessible and easy to digest, and she never dodges the complexities and rigor of her subject. This is an enlightening and unflinching examination of the tragedies of mass incarceration and the complicated role that faith-based ministries play in prisoner rehabilitation and the beliefs around it.”
—Publishers Weekly, Starred Review

“Tanya Erzen’s writing shines light on the history of American prisons, on the role of religion within these desolate locales, and also on the lives lived by the prisoners she profiles. Her work is both illuminating and deeply, intimately, human, exploring the impossible situations lived in by hundreds of thousands of our fellow citizens, and the ways that people try to salvage something out of the most soul-destroying environments imaginable. In an era of brutality, Erzen’s empathic voice is needed more than ever.”
—Sasha Abramsky, author of The American Way of Poverty

“Tanya Erzen’s God in Captivity offers an exceptionally nuanced and often heartbreaking picture of the role religion plays in the US prison system, both today and from its founding. As Erzen writes, the escape from brutalization that prison ministries provide can be, simultaneously, a lifeline for people attempting to wrest back a portion of their humanity, and state-sanctioned bigotry; a new chance at family for those who’ve been disowned, and a biased system that methodically shepherds desperate inmates into the most restrictive of faiths; and the offer of inner freedom in a purgatory without parole, and the sanctification of a deeply racist system descended directly from slavery. In prison, as in the outside world, all of these things are true at once, and it takes empathy, integrity, and skill to give them full voice. An important book for our times.”
—Kathryn Joyce, author of The Child Catchers and Quiverfull