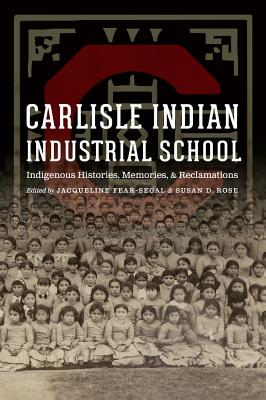 The Carlisle Indian School (1879–1918) was an audacious educational experiment. Lieutenant Richard Henry Pratt, the school’s founder and first superintendent, persuaded the federal government that training Native children to accept the white man’s ways and values would be more efficient than fighting deadly battles. The result was that the last Indian war would be waged against Native children in the classroom.

More than 8,500 children from virtually every Native nation in the United States were taken from their homes and transported to Pennsylvania. Carlisle provided a blueprint for the federal Indian school system that was established across the United States and also served as a model for many residential schools in Canada. The Carlisle experiment initiated patterns of dislocation and rupture far deeper and more profound and enduring than its founder and supporters ever grasped.

Carlisle Indian Industrial School offers varied perspectives on the school by interweaving the voices of students’ descendants, poets, and activists with cutting-edge research by Native and non-Native scholars. These contributions reveal the continuing impact and vitality of historical and collective memory, as well as the complex and enduring legacies of a school that still affects the lives of many Native Americans.

Jacqueline Fear-Segal is a professor of American and Indigenous histories at the University of East Anglia, UK. She is the author of White Man’s Club: Schools, Race, and the Struggle of Indian Acculturation (Nebraska, 2007) and coeditor of Indigenous Bodies: Reviewing, Relocating, Reclaiming. Susan D. Rose is the Charles A. Dana Professor of Sociology at Dickinson College. She is the author of Keeping Them Out of the Hands of Satan: Evangelical Schooling in America and Challenging Global Gender Violence and coauthor of Exporting the American Gospel: Global Christian Fundamentalism.

"Indigenous voices are at the center of the work. . . . These indigenous voices connecting past and present reinforce the editors' larger effort to historicize, reclaim, and commemorate the Carlisle Indian School."—Hilary N. Green, Journal of the Gilded Age and Progressive Era
— Hilary N. Green

"An important contribution to the study of boarding schools. . . . The collective effort of this book restores, reflects, and remembers these children and their stories."—Jacob C. Jurss, South Dakota History
— Jacob C. Jurss

"A must-read not only for scholars of Native American history, but also for anyone engaging with a "studies" field. Carlisle Indian Industrial School presents a successful model of truly interdisciplinary and multi-genre work, integrating collaborative engagement beyond academia."—Reetta Humalajoki, Journal of American Studies
— Reetta Humalajoki

"Carlisle Indian Industrial School: Indigenous Histories, Memories, and Reclamations is a book that I would recommend to those wanting to read stories from individuals who have ties to Carlisle Indian Industrial School. These stories detail the challenges that occurred during the time Carlisle was in operation as well as the challenges the Native families experienced by sending, or being forced to send, their children to Carlisle. It is important to remember that the information that is provided needs to be examined to further digest and learn so that the same actions and mistakes are not taken into the future."—Samantha Crofford, Chronicles of Oklahoma
— Samantha Crofford

“By bringing together such a diverse range of voices—academics and non-academics, Native and non-Natives—to speak about the history and legacy of what remains the most well-known Indian boarding school, this book does us all a great service. The contributors share their important stories with exceptional grace, insight, and power.”—Stephen Amerman, professor of history at Southern Connecticut State University and author of Urban Indians in Phoenix Schools, 1940–2000
— Stephen Amerman