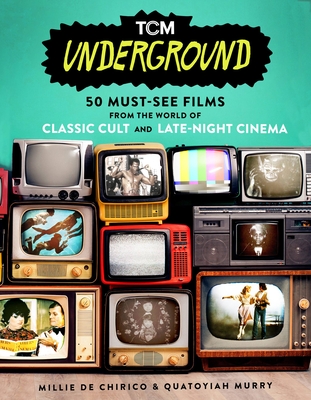 Based on the Turner Classic Movies series, TCM Underground is the movie-lover's guide to 50 of the most campy, kitschy, shocking, and weirdly wonderful cult films you need to see.

In the pages of this book, you'll explore this unique order of films—primarily from the 1960s, '70s, and '80s—with insightful reviews, behind-the-scenes stories, subgenre sidebars, and full-color and black-and-white photography throughout. Go along for the ride with new takes on crime films, including The Honeymoon Killers and The Harder They Come. Witness one-of-a-kind horror in Bill Gunn's landmark vampire film Ganja and Hess and Nobuhiko Obayashi’s infamous and indescribable Hausu. Absorb the boundary-pushing documentary-style trilogy The Decline of Western Civilization, which throws you into indelible moments in the punk and metal music scenes. And marvel at pure '80s oddities like Mac and Me and The Garbage Pail Kids.

From Possession to Polyester and Beyond the Valley of the Dolls to Xanadu, no two films are alike in this compendium. Just sit back and prepare to be surprised, amused, and entertained by this celebration of the stars, filmmakers, and stories behind fifty of the most beguiling and unforgettable movies ever to hit the screen.

Millie De Chirico is the chief programmer for TCM Underground, and hosts its companion YouTube series, TCM Slumberground. She is also one-half of the film podcast I Saw What You Did which spotlights unexpected, thematic double features. She lives in Atlanta, Georgia.

Quatoyiah Murry is a film critic and writer who has worked with TCM and FilmStruck, as well as written under the moniker The Cinephiliac, with contributions to Time, Pretty Clever Films, and Movie Boozer. Her work often focuses on diversity, representation, and historical context in film. Born and raised in Georgia, she now resides in Paris, France.

With knowledge, humor and an appropriately twisted perspective, [the authors] give readers a fuller realization of what late-night cinema offers. With a foreword by Patton Oswalt, this celebration of strangeness is well worth exploring.—PopCultureClassics