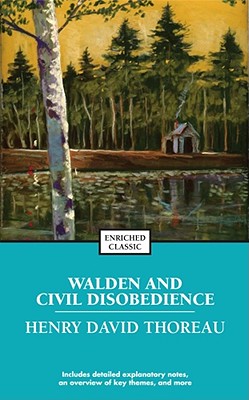 By Henry David Thoreau
$5.99
Email or call for price.

Naturalist and philosopher Thoreau's timeless essays on the role of humanity—in the world of nature, and in society and government.

Thoreau, a sturdy individualist and nature lover, lived a spare existence in a wooden hut on the edge of Walden Pond near Concord, Massachusetts, from 1845 to 1847. "Walden" is the fruit of Thoreau's two-year stay on the Walden Pond. It is a record of his experiment in a simple life and his contemplation of the wonders of nature and the ways of man. He carefully shaped the book to follow the natural cycle of the seasons, yet it is more than an account of life in the woods, it is a quest for personal freedom and individuality that evokes nature without being sentimental or distorting the natural world.

"Civil Disobedience" was also based on Thoreau's experiences during the period he lived on the pond. In 1846, he was arrested for not having paid his poll tax, as a way of demonstrating that he did not recognize the authority of a government that "buys and sells men, women, and children." It is a treatise against slavery and a government that wages war to support injustice.

This edition includes:
-A concise introduction that gives readers important background information
-A chronology of the author's life and work
-A timeline of significant events that provides the book's historical context
-An outline of key themes and plot points to help readers form their own interpretations
-Detailed explanatory notes
-Critical analysis, including contemporary and modern perspectives on the work
-Discussion questions to promote lively classroom and book group interaction
-A list of recommended related books and films to broaden the reader's experience

American essayist, poet, and practical philosopher, best-known for his autobiographical story of life in the woods, WALDEN (1854). Thoreau became one of the leading personalities in New England Transcendentalism. He wrote tirelessly but earned from his books and journalism little. Thoreau's CIVIL DISOBEDIENCE (1849) influenced Gandhi in his passive resistance campaigns, Martin Luther King, Jr., and at one time the politics of the British Labour Party. Henry David Thoreau was born in Concord, Massachusetts, which was center of his life, although he spent several years in his childhood in the neighboring towns and later elsewhere. He died of tuberculosis, and he is buried in his family's plot near the graves of his friends Hawthorne, Alcott, Emerson, and Channing on Author's Ridge in Concord's Sleepy Hollow Cemetery.