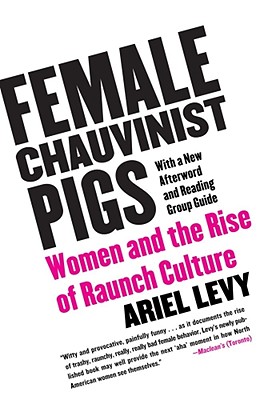 A classic work on gender culture exploring how the women's movement has evolved to Girls Gone Wild in a new, self-imposed chauvinism. In the tradition of Susan Faludi's Backlash and Naomi Wolf's The Beauty Myth, New York Magazine writer Ariel Levy studies the effects of modern feminism on women today. Meet the Female Chauvinist Pig--the new brand of "empowered woman" who wears the Playboy bunny as a talisman, bares all for Girls Gone Wild, pursues casual sex as if it were a sport, and embraces "raunch culture" wherever she finds it. If male chauvinist pigs of years past thought of women as pieces of meat, Female Chauvinist Pigs of today are doing them one better, making sex objects of other women--and of themselves. They think they're being brave, they think they're being funny, but in Female Chauvinist Pigs, Ariel Levy asks if the joke is on them. In her quest to uncover why this is happening, Levy interviews college women who flash for the cameras on spring break and teens raised on Paris Hilton and breast implants. She examines a culture in which every music video seems to feature a stripper on a pole, the memoirs of porn stars are climbing the bestseller lists, Olympic athletes parade their Brazilian bikini waxes in the pages of Playboy, and thongs are marketed to prepubescent girls. Levy meets the high-powered women who create raunch culture--the new oinking women warriors of the corporate and entertainment worlds who eagerly defend their efforts to be "one of the guys." And she traces the history of this trend back to conflicts between the women's movement and the sexual revolution long left unresolved. Levy pulls apart the myth of the Female Chauvinist Pig and argues that what has come to pass for liberating rebellion is actually a kind of limiting conformity. Irresistibly witty and wickedly intelligent, Female Chauvinist Pigs makes the case that the rise of raunch does not represent how far women have come, it only proves how far they have left to go.

"With Female Chauvinist Pigs, Ariel Levy becomes feminism's newest and most provocative voice, brilliantly laying bare the contradictions and evasions and self-deceptions that pass for empowerment."

-- Malcolm Gladwell, author of Blink and The Tipping Point


"Reading Female Chauvinist Pigs, Ariel Levy's lively polemic, gave me an epiphany of sorts. Finally a coherent interpretation of an array of phenomena I'd puzzled over in recent years.... Levy's argument is provocative -- and persuasive...a consciousness-raising call to arms."


"With the fresh voice of a young woman who grew up taking equal rights for granted while feminism was being perverted into a dirty word, Levy both shocks and sobers as she exposes the real cost of youth culture's 'Girls Gone Wild' form of status-seeking....A great choice for book clubs of either gender, it's a fast read and a surefire discussion sparker."