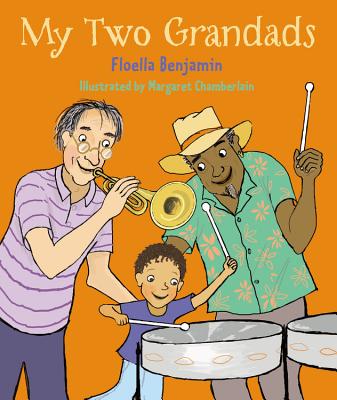 Aston's Grandad Roy played in a steel band and Grandad Harry played the trumpet in a brass band. Aston always enjoyed going to visit them and listen to them practise. But soon he wanted to join in. So he asked Grandad Roy to teach him to play the steel drums and then he asked Grandad Harry to teach him to play the trumpet. He loved practising both instruments. Then the school needs a band to play at the school fair, and both grandads want their own band to play. Finaly Aston had an idea - both bands join together to make one big band, and Aston joins in first on steel drums and then on trumpet. This delightful story of a mixed-race family reconciling their very different cultures is a wonderful celebration of diverse cultures. Written by one of Britain's foremost campaigners and media personalities and illustrated by a highly regarded illustrator, this book is sure to build on the success of My Two Grannies.

Floella Benjamin Obe is an iconic children's television presenter, producer, actress, and author who for over 30 years has dedicated her life to making children happy and campaigning for their well-being. She has written over 20 books including Skip Across the Ocean, My Two Grannies, and My Two Grandads, for Frances Lincoln, as well as her acclaimed two-part autobiography, Coming To England, which was made into a film for BBC TV in 2003, and The Arms of Britannia, of which the Daily Telegraph said, "Few other books are as enlightening - or as important - as this one."

Margaret Chamberlain is a well-respected illustrator of children's books. Her books for Frances Lincoln include Has Anyone Seen Jack?, Look Out He's Behind You, Tales from Grimm, My Two Grannies and My Two Grandads.