When Chickenheads Come Home to Roost: A Hip-Hop Feminist Breaks It Down (Paperback) 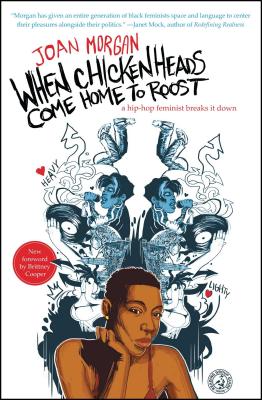 “Morgan has given an entire generation of Black feminists space and language to center their pleasures alongside their politics.” —Janet Mock, New York Times bestselling author of Redefining Realness

“All that and then some, Chickenheads informs and educates, confronts and charms, raises the bar high by getting down low, and, to steal my favorite Joan Morgan phrase, bounced me out of the room.” —Marlon James, Man Booker Prize–winning author of A Brief History of Seven Killings

Still as fresh, funny, and ferociously honest as ever, this piercing meditation on the fault lines between hip-hop and feminism captures the most intimate thoughts of the post-Civil Rights, post-feminist, post-soul generation.

Award-winning journalist Joan Morgan offers a provocative and powerful look into the life of the modern Black woman: a complex world in which feminists often have not-so-clandestine affairs with the most sexist of men, where women who treasure their independence frequently prefer men who pick up the tab, where the deluge of babymothers and babyfathers reminds Black women who long for marriage that traditional nuclear families are a reality for less than forty percent of the population, and where Black women are forced to make sense of a world where truth is no longer black and white but subtle, intriguing shades of gray.

A pioneering hip-hop journalist and award-winning feminist author, Joan Morgan coined the term “hip-hop feminism” in 1999 with the publication of When Chickenheads Come Home to Roost, which is now studied at colleges across the country. She is currently the program director of the Center for Black Visual Culture at NYU.

“Master storyteller Joan Morgan navigates the torrid waters of gender, race, and power with grace, humor, and, most of all, love.”
—Daniel José Older, New York Times bestselling author of the Shadowshaper series

“Joan Morgan stripped feminism of its basic Black and Whiteness—redressed it in her own beautiful, badass, complicated, challenging, shades-of-gray couture criticism. Before it was popular to be ‘out’ as an unapologetic, magic, hood-loving, imperfect, sexy-ass, Black feminist, Joan put it down in Chickenheads, validating a whole generation of fierce young women, just waiting for that brave bitch to fire the shot, so we all could just go.”
—Michaela Angela Davis, CNN and BET correspondent

“Without doubt, Black Women had made meaningful interventions into Feminist Thought before the publication of When Chickenheads Come Home to Roost, but none can claim to have done so wearing three-inch pumps, while bumping Heavy D, and sprinkling enough #BlackGirlMagic to conjure a new generation of Black Feminists who give no ‘f*cks’ to those who dare deny the value of a Black Girl’s life and her desires.”
—Mark Anthony Neal, author of Looking for Leroy

“In When Chickheads Come to Roost, Joan Morgan began dismantling the one-dimensional ‘strong Black women’ myth. The unapologetic realness in her essays, even today, are a beacon for young women on the journey of accepting—and celebrating—the beautiful complexities of womanhood.”
—Cori Murray, entertainment director at Essence

“The debt that a generation of writers, thinkers, and activists owe to Joan Morgan is incalculable. Joan gave us permission to ‘fuck with the grays’ and provided the blueprint for an analysis of culture that yields more vibrant and nuanced takes on our humanity. For me, as a man who wants to be challenged to unpack the failures of black men to show up and fight for sisters, the beauty in Joan’s words is that she didn’t stop at their trauma, but allowed us into the world of bountiful, beautiful blackness that black women have lived by. Chickenheads changed the game.”
—Mychal Denzel Smith, New York Times bestselling author of Invisible Man, Got the Whole World Watching

“Definitely not your mother’s guide to the Equal Rights Amendment.... Morgan’s reflections are as timely as they are cogent.”
—Kristal Brent Zook, Vibe

“Morgan tussles with the perceived contradictions of being black, female, fly, and feminist—from the myth of the strongblackwoman to chickenhead envy... a fresh alternative to accepted notions about black womanhood.”
—Lori L. Tharps, Ms.

“When Chickenheads Come Home to Roost... is gaining nationwide acclaim for adding a fresh, idiosyncratic point of view—the voice of a new generation—to the oft-debated saga. Painstakingly straddling the line which separates street smarts from book intelligence, Morgan offers 240 pages worth of commentary on what it is like for a Black woman to come of age, Gen-X style.... While most Gen-Xers claim to be ‘keepin’ it real,’ Morgan’s new book instead shows that she’s making the conscious choice to ‘keep it right.’ And not only by flipping and bouncing words and phrases that reflect today’s popular culture, this new age feminist shows and proves that the day in which James Brown screams ‘it’s a man’s world’ might be finally coming to a dawn.”
—Michael J. Rochon, Philadelphia Tribune

“As is the case with a lot of Morgan’s work, Chickenheads remains unafraid to ‘go there’ around a few touchy issues.... [The book] will definitely engender passionate discussions among readers.... Regardless of how interpreted, you gotta give it up to this ‘yardie gyal’ from the Bronx who’s brave enough to put her ideas out there so that the rest of us home-grrrls can all together start climbing toward wholeness.”
—Honey

“Whether one agrees with Morgan or not, the sister definitely makes you think.”
—Ronda Racha Penrice, Rap Pages

“A journalist by trade and outspoken black feminist by inclination, Joan Morgan has style to burn.... When Morgan brings it, she’s funny, fierce, and yes feminist.... Morgan insists that the hip-hop generation can set its own goals—emotional, spiritual, social and political. Time to move on, and Morgan’s leading the way.”
—Cindy Fuchs, Philadelphia City Paper

“It’s refreshing to see Morgan add racial dynamics to the gender- politics Debate.... This book is a postmodern Waiting to Exhale—a romantic melodrama for all the black women who are beautiful, smart, accomplished and not apologizing for any man who can’t get his act together.... Morgan is a credible independent spirit and autonomous woman.”
—Caille Millner, San Jose Mercury News

“Joan Morgan has undertaken the necessary and painstaking task of navigating the world of Black Male/Female relationships. You go Joan! I saw myself in this book. Thank you for making me stop and think and reciprocate love.”
—Ananda Lewis

“Everything you want to know about the sisters—and then some.”
—Sean “Puffy” Combs

“Joan Morgan writes with passion, pain, and a charming playfulness about the fun and games of African-American life in the nineties.”
—Nelson George, author of Hip Hop America

“Strong, soft, wise, and right on the beat with much flava to savor.”
—Fab 5 Freddy