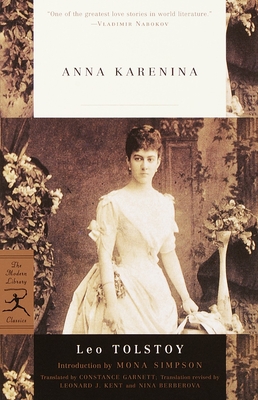 Considered by some to be the greatest novel ever written, Anna Karenina is Tolstoy's classic tale of love and adultery set against the backdrop of high society in Moscow and Saint Petersburg. A rich and complex masterpiece, the novel charts the disastrous course of a love affair between Anna, a beautiful married woman, and Count Vronsky, a wealthy army officer. Tolstoy seamlessly weaves together the lives of dozens of characters, and in doing so captures a breathtaking tapestry of late-nineteenth-century Russian society. As Matthew Arnold wrote in his celebrated essay on Tolstoy, "We are not to take Anna Karenina as a work of art; we are to take it as a piece of life."

The Modern Library has played a significant role in American cultural life for the better part of a century. The series was founded in 1917 by the publishers Boni and Liveright and eight years later acquired by Bennett Cerf and Donald Klopfer. It provided the foundation for their next publishing venture, Random House. The Modern Library has been a staple of the American book trade, providing readers with affordable hardbound editions of important works of literature and thought. For the Modern Library's seventy-fifth anniversary, Random House redesigned the series, restoring as its emblem the running torch-bearer created by Lucian Bernhard in 1925 and refurbishing jackets, bindings, and type, as well as inaugurating a new program of selecting titles. The Modern Library continues to provide the world's best books, at the best prices.

"One of the greatest love stories in world literature."
--Vladimir Nabokov