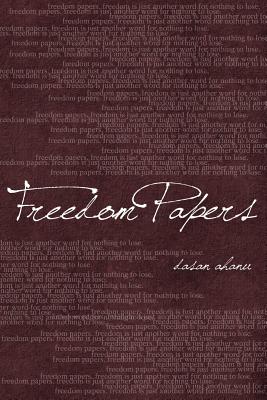 I'm a punchline...words beaten into a page. I'm a hyperbole...a gross exaggeration of what blessings I deserve. I'm alliteration...repetitive mistakes with the first smile that follows an "I need you". I am personification...my mother's prayers given human characteristics. I am nothing but a literary device. So I write. This book is a collection of thoughts, observations, inspirations, and declarations about life. It is about the freedom of the human spirit. It is about freedom of speech and free thought. Each poem is intended to reflect the lives we live, the obstacles we face, and the victories we claim. In it, I hope that the reader finds reasons to be outraged, encouraged, inspired, shocked, touched, and engaged. I also hope that these poems inspire other voices to find their way to the page. Write Free, Speak Free, Live Free.

Dasan Ahanu is a public speaker, organizer, workshop facilitator, poet, spoken word performer, songwriter, writer, emcee, and loyal Hip Hop head born and raised in Raleigh, North Carolina. In addition to performing, Dasan has hosted many poetry, jazz, Hip Hop, and cultural arts events across the state. As an actor, Dasan has been a cast member of the hip-hopera, "Right is Right" and a Harlem Renaissance production, "Images", which was produced by National Ensemble Theater and featured at the National Black Theatre Festival. He is one of the founders of Black Poetry Theatre (BPT) and has been a writer, director, producer, and cast member of six productions. Also an active participant in poetry slam, Dasan has competed regionally and nationally for six years as a founding member of Durham, NC's own Bull City Slam Team (BCST). Dasan is also a recording artist who has collaborated with many of North Carolina's most notable emcees, vocalists, and musicians. In 2007 he partnered with producer Scott Warren, known also as Picasso, to form The Jim Crow Jackson Experiment. Their self titled debut album was released domestically by local indie record label Amp Truth Records and internationally by Australian indie Grindin Records. The duo is currently prepping their sophomore release.   Believing that "with great talent comes great responsibility", Dasan has also used his skill and resources to aid in developing the community and further social change. He has worked as an organizer on such issues as war, social injustice, workers rights, domestic violence and sexual assault; planned and facilitated community programs for Duke University's Center for Documentary Studies; conducted creative writing and performance workshops at middle schools, high schools, and colleges throughout North Carolina; and spent time working with at-risk/court-involved youth. Ahanu has been a speaker or workshop facilitator at a number of notable conferences and symposiums speaking on topics such as the impact of cultural arts programming, the arts and social justice, Hip Hop culture, and the arts as a tool for literacy. A believer in the power of creative expression as an educational tool, he is currently a teacher at Duke University's Young Writer's Camp, creative consultant and resident artist at the Hayti Heritage Center in Durham, NC and an Assistant Professor at Saint Augustine's College in Raleigh, NC.